Today’s New Restrictions Are Going To Hit Football Like A Hammer. Hard Times Lie Ahead. 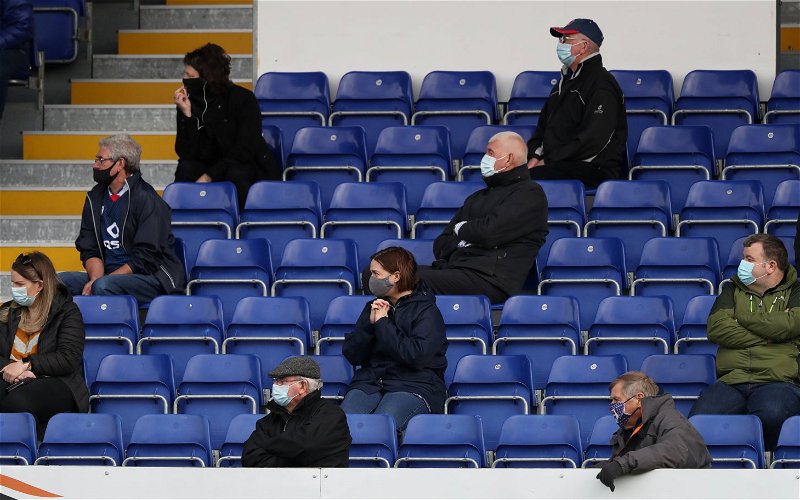 Boris Johnson has just announced that newly imposed restrictions due to the global health emergency will include a freeze on the return of fans to football grounds, and that we should expect these to be in place for around six months.

At 2:30 the First Minister of Scotland is going to make her own statement and it is likely to echo what Johnson has said.

That will ensure that this is a uniform set of measures for the UK.

All across the country, this is going to hurt but I cannot think of a single industry that is going to take the kind of battering that football is. It is now self-evident that there should be a meeting of the SPFL at the earliest convenience and that clubs should be balloted on whether or not they want the current campaign to go ahead under these restrictions.

The top flight should be playable; the top flight clubs have already instigated the Virtual Season Ticket scheme and St Mirren have already sold digital passes to Celtic fans who would otherwise have gone to that game, so the system in the top flight works … it is not perfect, but it is not going to be as costly or as damaging as having no fans at all.

But below the top flight, other clubs are going to treat this as an existential crisis.

With zero income from ticket sales, and outgoings for every match, player wages and other costs, this is going to be absolutely crippling.

The best thing they can do is close their doors and seek whatever protections in the law that they can. Some of them aren’t going to survive it anyway.

This is an entire industry that is going to be dead on its feet long before this crisis ends, and really there’s nothing that can be done about that.

Those asking for government subsidies are starkly ignoring the truth; the hospitality and leisure industries are already on their knees and facing far worse as this thing rolls on. Closing venues two hours early and limiting service to who’s sat at tables will offset some of the spread … but they won’t help struggling businesses.

We can’t subsidise them all, not indefinitely.

A lot of football clubs are not going to come out of this on the other side.

The one across the city might well be one of them, and a lot of people are living in total denial about that possibility, but they shouldn’t be.

Our club will be lucky to survive it without major cuts and changes. That’s the harsh truth of it. There is no end in sight to this, and it is partly because governments bowed to the very industries which are screaming here and moved too far and too fast in loosening restrictions.

This was never going to end well for football.

The short-sightedness of even scheduling the lower leagues to begin, when we knew thing was likely to come roaring back by winter, takes your breath away. It was never other than a bad idea … and now the fully folly of it is becoming apparent. No fans inside grounds for six months, unless something major breaks?

Are we going to get a vaccine in that timeframe? Doubtful, so unless we can get numbers down to the point where we’ve almost got this thing eliminated we might as well assume that this is the pattern to follow. Six months, Jesus … a lot of our clubs will be gone long before then.

This is a red letter day for the game; mark it down for posterity.

22 September 2020 … the day football in this country stood on the brink.