Celtic Showed Up Tonight, And Bad Luck Has Denied Us An Outstanding Result. 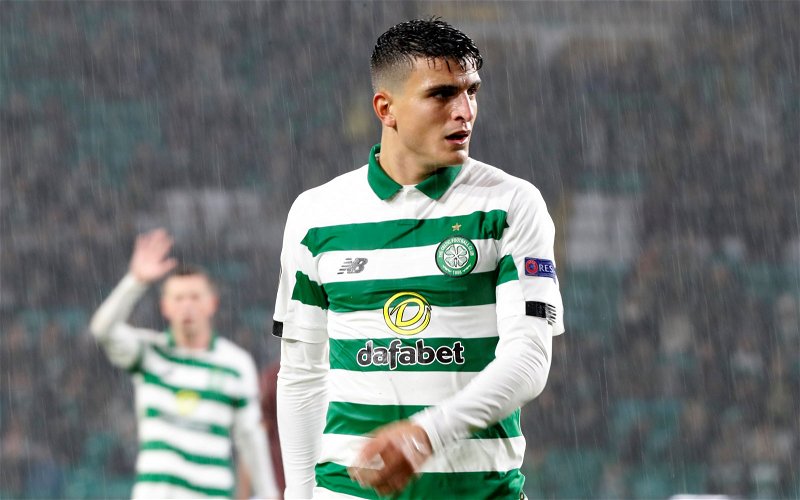 There are no complaints tonight except that we haven’t won, and we deserved to because we were the better team for the bulk of the game and we could have easily scored a couple more. Some poor individual decisions – perfectly understandable ones – at the top end of the pitch have meant we leave with one point instead of three but the team and the manager can be proud of that effort.

Before the game all of us would have taken a point.

At half time – the first half performance was absolutely outstanding, easily the best 45 minutes of the season – none of us could imagine that we wouldn’t leave with all of them. The second half we were a little flat but nobody failed us. A couple of the players looked dead on their feet at full time, but then they had put in a shift and a half.

The goals we lost were disappointing, because the keeper should maybe get the first.

The second is sheer dreadful luck, the guy who gets the “assist” miss-hit the ball and the bounce put it in the path of the striker.

One of those things you cannot legislate for.

Some individual performances are to be praised most highly. I thought Elyounoussi was superb in flashes, and he’s taken both of his goals brilliantly. He’s actually flubbed the one he should score, when he has a one-on-one and takes a couple extra touches and ends up pulled out wide.

But I thought he was brilliant overall, although that particular chance, had he scored it, would have put the match out of sight for us.

He showed us what he’s got tonight.

The other candidate for man of the match was Laxalt. He is growing into the role and is already, clearly, a serious upgrade on Bolingoli and Greg Taylor. I feel bad for Taylor actually, a guy who didn’t do much wrong but faces an uphill battle to get back into the team.

On that form though you cannot keep Laxalt out of the side. He covered every blade of grass. He popped up on the right and in the middle. His reading of the game is almost scary, and what’s more, he can actually defend which was something to see.

The manager got everything right tonight, from the team which started – although you could have made an argument for Rogic and Griffiths, as I did before the game, it was a very good first eleven and I had no complaints – to the tactical system; no launching it up the wing and crossing it into a packed box tonight. The players ran with the ball, we played quick and simple passes through the middle and we made chances enough to have scored more.

His substitutions were timely and excellent, especially the last ones which solidified the team for the run in without weakening us in an attacking sense.

Bad luck played a role in us not winning tonight; the injury to Ajer was critical, unfortunately, because from that point on we looked a little rocky when we’d been cruising until then.

Tonight I’ve taken a lot of heart from what some might spin as a negative result. The team continued from where they left off playing at Aberdeen in the second half at the weekend; the fast, flowing stuff through the middle which no team has answers to is back with a vengeance. We could have run up the score in the first half and it wouldn’t have flattered us.

In the second the team took the foot off the gas somewhat but towards the end we had a late rally where we showed again what we could do. If we play like that on Sunday, with the tempo of the first half especially, we will stand on the brink of the greatest domestic achievement in the history of Scottish football, for all the woes of the past few weeks.

I am going to bed tonight well pleased and proud of my team.

That was not just “more like it”, that was It.

That was Celtic, and it was such an excellent first half display, and such a determined one overall, that my heart feels lighter than it has in weeks.

I wonder if we haven’t just witnessed a turning point here.