Celtic Supporters Are Unconvinced By Greg Taylor, But Are Their Doubts Entirely Warranted? 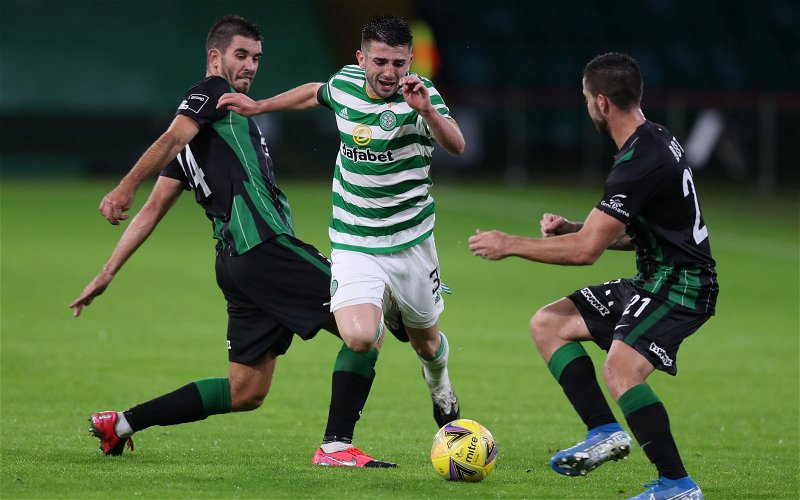 When Greg Taylor arrived in Glasgow in September 2019, both he and Celtic appeared to have particularly high hopes for this transfer.

While he managed to quickly rise to the forefront, his journey so far has had its fair share of ups and downs.

When he was signed, it looked as though he was going to play understudy – at least at first – to Bolingoli, who was a sexier name and who’d cost Celtic £3 million.

But as confidence in the signing from Rapid Vienna started to wane, Taylor found himself becoming a bigger part of the team.

A year later, he seems to have landed on the bad side of many Celtic fans, who have taken to social media to express their dismay.

But is the criticism that Taylor is faced with well-founded or unfair?

Since he first started, Taylor has not receiveed the sort of favourable reviews on social media that he would have hoped for, which is putting it mildly. He has been frequently picked on by quite a few Parkhead natives – so much, in fact, that he ended up trending on Twitter recently.

But let’s take a look at the facts to see whether his trajectory has warranted this unkind treatment.

While Taylor joined the Bhoys in September 2019, he would have to wait until 2020 to properly feature on the starting team. He only played one league match prior to that, which he took to Twitter to celebrate.

He sat patiently on the bench for the rest until Neil Lennon decided to give him a chance.

With the reshuffling of the roster after the departure of the great Johny Hayes and with Boli Bolingoli having specacularly blown up his Celtic career, and now on loan to a Turkish club, it seemed that there was room for Taylor to shine as a left back.

Some argue that he’s not a natural in the positions where Lennon seems to want him to play; in short, Lennon is deploying him as we would have Kieran Tierney, although he has a slightly different set of skills.

His talents give do allow him to play in the position, but he is slightly out of his comfort zone.

This could explain why he blows hot and cold in many games.

The second part of the problem is that until Laxalt was signed in the window, Taylor was actually the only player who was available to Celtic in the attacking wing-back role; this puts a lot of pressure on the 22-year-old, especially with Lennon’s insistence on the 3-5-2 formation.

The inevitable Tierney comparisons are not helpful either.

Why are Hoops Fans so Frustrated Over Taylor?

The Hoops have been tremendous at club level during the last few years. They have managed to snatch Treble Treble’s, making plenty of history along the way … as such, standards are high and the fans like to see players who look capable of playing at the highest level.

In spite of recents reports to the contrary, we are still best placed among the top on sports betting sites to win over the course of this campaign.

With mobile betting becoming increasingly popular, through offering competitive odds, fixtures, and bonuses, football is the most bet on sport in the UK.

Many fans continue to bet on Celtic to take home the title … and in fact, last week’s result and the poor form actually make them a more attractive prospect than usual.

All are aware of the pressure on the Glasgow team to defend these trophies and secure the ten in a row legacy.

And this, of course, is why the Hoops supporters are getting nervous over Taylor’s performance.

Since the Scottish international has been given a starter spot, this nervousness seems to have transformed into outright vitriol.

Much of that comes from our clownish media … they never pass up a chance to have a smack at our club.

Some have wondered if Taylor triggers subconscious bias, as he started his professional career playing as a youth for rival Rangers?

Others point to the number of players from that background who we’ve successfully assimilated into the club over the years.

It seems like a stretch, if we’re being generous to those suggesting it …

According to Kris Commons, the answer is even simpler: Parkhead still pines for Kieran Tierney.

There’s little doubt that this is part of the problem.

Taylor’s fellow Scottish international made his debut for the Bhoys in 2015 and was so beloved he was named captain just two years later.

Tierney was there for the Invincible campaign and back-to-back domestic trebles.

He left the club for Arsenal in August 2019 for a reported fee of £25 million.

Just as the Hoops former captain left, Taylor joined the club, and was soon called to act as its primary left back.

These were momentous shoes to ask him to fill; almost anyone we signed would have come up short.

Does Taylor Deserve the Criticism?

To make matters worse for Taylor, after being plagued with injuries, 23-year-old Tierney continues his impressive strike with Arsenal.

This makes Taylor an easy target for scathing attacks, according to Commons, who leapt to Taylor’s defense. Although he enjoys having a pop at us these days, Commons urged fans to give Taylor a break, especially before and after games, as he believes that Taylor is being criticised regardless of how he actually performs.

In this he’s very like James Forrest; a lot of fans have simply made their minds up about Taylor, and will find a reason to criticise him no matter what he does.B

But you have to consider the pressure this kid is under … and especially when all through the window it was clear that Lennon wanted to add another left back to the team, which he suceeded in doing on the final day of the window.

This adds uncertainty to the overall picture; how would you perform at work if your company actually seemed to be looking for a replacement?

Taylor’s future a bit uncertain and it would be understandable that amidst all that he remains slightly distracted on the field.

Yet his performance is certainly not as abysmal as some Hoops fans will have us believe.

According to stats on Transfermarkt, last season he managed to provide 5 assists, and this season alone he has delivered 4 assists in 13 appearances and scored his first Celtic goal in August.

There is certainly room for improvement, but Greg Taylor shows potential in the face of close scrutiny from Celtics fans.

Perhaps actually giving him a chance to play, undistracted, could help turn that potential into a more powerful performance.

Ibrox Fans Attacks On The Tartan Army Are Ridiculous, Spiteful And Delusional.