It Is Absolute Nonsense For Thompson To Blame Lawwell For Celtic’s Weekend Loss. 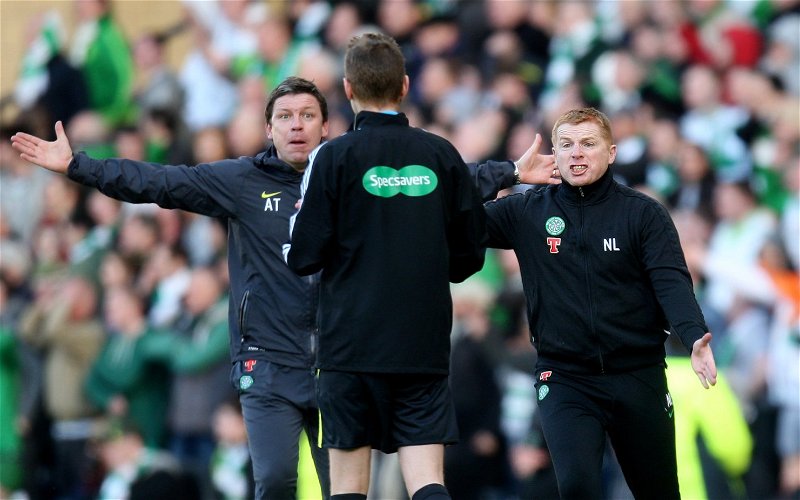 Regular readers know that I am no great fan of the CEO.

On a personal level, I like the guy but he’s been in the job way too long for a man in his position.

The average length of time a CEO is at a company in the UK is under five years; he’s been at Parkhead nearly 20.

Even with the best will in the world, that will cause stagnation.

What every organisation needs, periodically, is a fresh set of eyes, a new perspective. A new plan.

There is talk that Lawwell will depart at the end of this season, whatever the outcome.

If we win ten in a row he can go in triumph. If we fail to then frankly he’s not going to have a choice in the matter. If he tries to gut it out he’s going to find it impossible to shift many season tickets. He’ll pay that price for hiring the manager. That’s just how it will be.

That the manager will go with him in that scenario hardly needs to be pointed out.

Lennon could not survive that outcome.

Alan Thompson is a part of Celtic’s history.

He will play no role in its future.

He was let go by the club in 2012, and freely admits that his off-field lifestyle was part of the cause. He says he feels no bitterness towards the manager, which is evident in his public remarks, but has never been quite so ready to forgive other people at the club.

Indeed, there is talk that a return to Parkhead, to work under Lennon, was vetoed by persons inside Celtic Park.

Perhaps that’s the reason for his bitterness at Lawwell, and the reason he very publicly tried to heap the blame for Saturday’s shambles at the CEO’s door.

But Lawwell was not responsible for what we witnessed at the weekend, and no amount of revisionism will make that so.

Lawwell has backed Neil Lennon in the manager’s role.

This summer we spent almost £20 million between transfer and loan fees and retained every one of our best players in spite of an early exit from the Champions League.

Lawwell may set the strategy, but he did not pick the team nor the tactics.

It was not Lawwell who waited until we were 2-0 down to make changes.

It wasn’t Lawwell who went with a like-for-like swap when we finally did.

It was not Lawwell who commanded the team to adopt such a rigid style which is awful on the eye and leaves gaps all over the midfield, and has the team playing at a pedestrian pace constantly passing the ball backwards and sideways with no movement from players at all.

The CEO is guilty of many thing, but not of having any role in that fiasco.

Everyone at Parkhead needs to dig deep this coming week, and find that extra level, or we’re going to find ourselves in even more turmoil than right now.

Nobody should be writing this off as a bad day at the office; it was part of a pattern which is the first thing people are going to have to face up to.

The manager is going to get criticism … it goes with the job.

People who want him to be exempt from it or immune to it do us no favours.

And casting about to blame people who aren’t responsible for the footballing operation isn’t going to help us either.

Thompson has allowed his personal views to cloud his judgement.

This was not his finest hour.