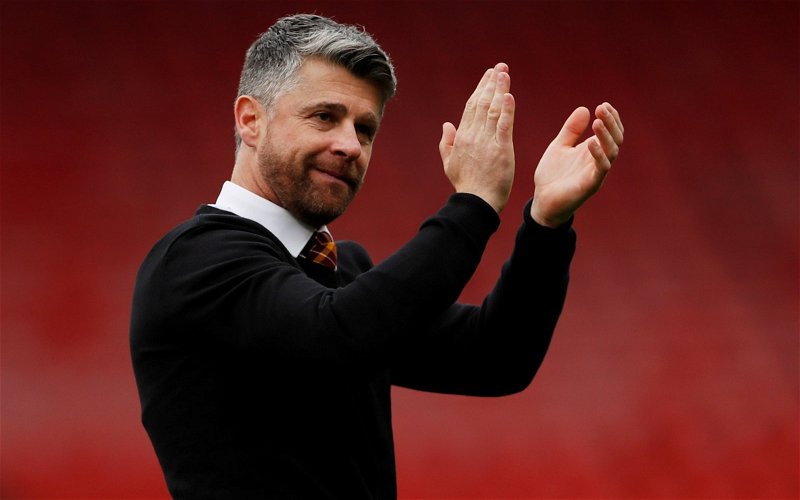 Yesterday the Motherwell manager Stephen Robinson apologised to Celtic for the remarks made by his club coach Maurice Ross, on Radio Scotland Sportsound at the weekend. Robinson’s apology came after Lennon had angrily raised the matter at a media conference earlier in the week.

Ross is the latest in a growing line of players and officials at other clubs in the SPL who think it’s perfectly okay to mouth off about Celtic.

I highlighted this when a Livingston player did it earlier in the month; that, too, was on the platform offered by the BBC.

Aside from anything else, people at Celtic are entitled to wonder just what the

Hell the national broadcaster is playing at.

We all know that if you’re a player or ex player, a manager or a coach, and you are looking for a bit of profile here in Scotland that there’s nothing more certain to get you on the telly or the radio or in the papers than having a go at this club of ours … but the national broadcaster is supposed to be above that.

That they so frequently allow us to be attacked this way is shocking.

This trend they have for putting people on the air to have a go at us when they are employed by other clubs is recent, and troubling.

No wonder people inside Celtic Park are unhappy about it. Lennon had to expect some criticism, but scattershot attacks from people working at other football clubs breaks one of the few unwritten rules left … professional sides just do not do this stuff.

Stephen Robinson knows that, which is why he offered the personal apology.

He knows well that if this stuff becomes commonplace you’ll have everyone doing it. How long before he’s got fellow bosses critiquing his own performance? How long until other managers or coaches are scrutinising his team’s displays and suggesting the club sack him?

They promote a never ending line of ex-Sevco players on that show, and Ross is only the latest of them.

If they want to give every former Ibrox no-mark a platform that’s up to them, but using people currently employed by other clubs drags those clubs into the mix as well.

Even if Celtic don’t respond – and Celtic should respond – the other clubs are equally entitled to, and Motherwell have shown they won’t tolerate it. Livingston didn’t. When Kris Boyd was taking snide shots at everyone in Scottish football, Kilmarnock allowed that … and Steve Clarke really should have known better than to make a rod for his own back.

But Robinson knew better. He showed a bit of class here. I wonder if there’s also been an internal inquiry at Motherwell into Ross’s behaviour; you’d expect that if they are making moves like this in public that they’d also be dealing with it in private.

At the BBC they probably think of it as a job well done; it was a disgrace that they allowed it though.

Lennon’s real issue ought to be with them.

It isn’t the first time this has happened and unless we get a grip of it, you can be sure it won’t be the last.