Celtic’s Players Have Carried The Scottish National Team Through Darkness Into The Light. 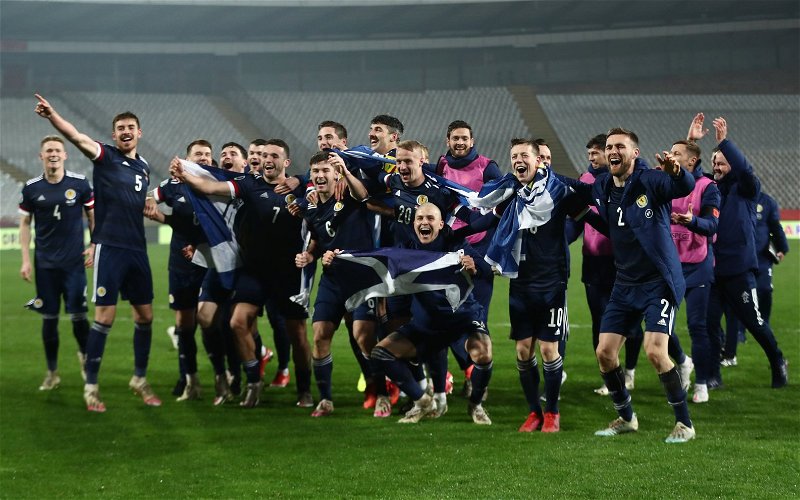 Last night’s victory for Scotland may not have made a lot of our fans feel as happy as they should have at seeing their nation go through to a major finals competition, but I don’t think any of us were other than pleased for the likes of Griffiths, McGregor, Christie and the rest.

We all know what it meant to them. We all know they love representing their country.

Through the darkness of the last decade, in particular, it is Celtic who have carried the flame for the national team, contributing more players than any other side and it’s our guys who have been there, and done it, at the most critical times. Otherwise things would have been worse.

Can you imagine the national team standings without the Celtic contingent of the last ten years? Jesus, it would be little short of nightmarish.

Even the big man Marshall was a product of our youth academy and there was a time a couple of seasons back when Kieran Tierney and Armstrong were at Celtic Park along with Craig Gordon when you could have almost have put out a Celtic XI for the national team and a few times as many as seven players were in the side.

We get precious little acknowledgement for it, far less thanks, but the truth is, our players have been badly let down by the Association during that time, not least of which were the wasted years under McLeish, years in which these players were at the top of their game.

These guys should have played at a major finals by now … we can blame the SFA’s dire approach for that failure.

It took the appointment of Steve Clarke, a guy with a warm relationship with Celtic, to move us on from that, and it’s no surprise that he’s done what others, including Gordon Strachan, by the way, were unable to.

The other most noticeable thing about this period is how little contribution Ibrox has made.

What does it amount to of late? Ryan Jack and a goalkeeper.

Oh yeah, and we should probably include the national embarrassment and waste of a jersey Ollie McBurnie, the striker who doesn’t score goals, who’s penalty last night was the one good thing the national team has had out of him. If sometimes think if he wasn’t an Ibrox fan and one who highlighted that fact every chance he got he wouldn’t be near the Scotland side. He has certainly done nothing to earn a jersey that I’ve ever watched.

But the question remains; where are the Ibrox academy graduates in the Scotland team?

They are nowhere. This entire era has been characterised by that clubs near absence from the international setup in this country.

This was certainly not a triumph owing anything to them.

They did give us the national coach before the current one, though, the one who presided over near anarchy and a drop in standards it took an age to reverse.

No, this is a triumph Made At Celtic Park, and for that reason as much as anyone I felt good watching our players last night in the aftermath of the game.

They were bursting with pride, and the sense of accomplishment that goes with walking a long way with the country on their backs.