No Celtic-Linked Striker Would Ever Get Away With McBurnie’s Rank International Record. 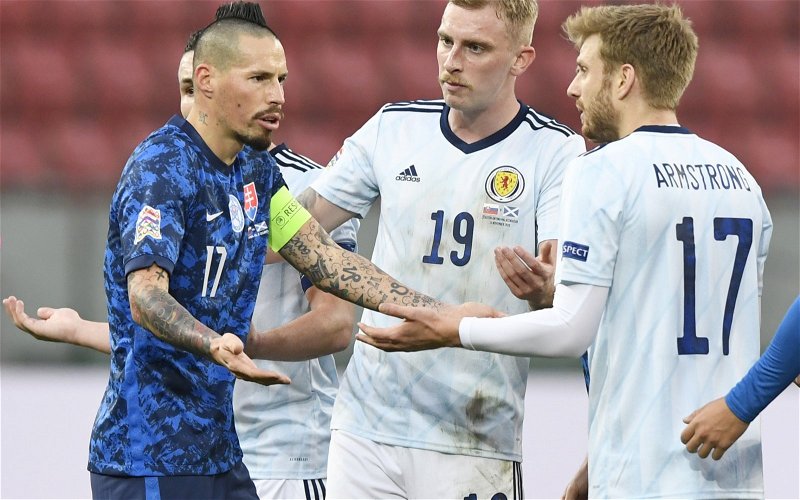 I was amazed – not surprised, but amazed – to see Steve Clarke defending the non-scoring record of Ollie McBurnie last night.

This is a player who has contributed not one thing to the Scottish National Team, in any way, shape or form.

But there’s a truth at the heart of McBurnie’s selection; he is a media favourite.

I can’t help wondering if this endless promotion of him comes down to the team he supports rather than any football talent he possesses; I cannot imagine a Celtic striker, or even a Celtic related striker, one who had professed a desire to play for the club one day, being similarly feted for not scoring goals.

One only has to look at the sneering at Oliver Burke these days whenever his name is mentioned to see how that works out.

Just the other day, I wrote a piece on Lyndon Dykes and his place in the Scotland squad; I said that in another era he would be nowhere near the team. But let’s give Dykes his due; he has scored goals in a Scotland shirt already.

He has wholly justified his inclusion in the current squad because of that. So too has Lawrence Shankland.

The national team is going to the Euros; it is an honour to represent your country in a major finals and I know every Scotland player will want to be there. But think of the strikers in Scotland who play every week and actually score goals.

Think of the likes of Kevin Nesbitt and even Nicky Clark; will these guys get a look in?

No, because McBurnie is before them in the queue.

If he makes the final squad for the Euros I have to question those doing the selecting and wonder how much input Clarke really has into the process, because he has to know that McBurnie’s scoring record, both at club and international level, is nowhere near good enough.

Yet the media loves this guy; just the other day David Tanner was banging on about him on Twitter and having a go at those who are critics of the player. B

Who’s he trying to kid? If McBurnie wasn’t a self-confessed Ibrox fan, and if he didn’t broadcast that point every chance he got, would the press even care? They’d see him for exactly what he is; another triumph of EPL style over substance like – and I hate to say this – Oliver Burke himself.

Another player who went from one English club to another for a momentous and unjustifiable fee, and who finds himself in the Scotland team mostly on that basis.

McBurnie has done nothing whatsoever to merit a place in the Scotland team.

He has played for his country fourteen teams and has yet to find the net; if he played for our club he’d have been dropped eight, ten, twelve games ago and the media would be furious if he was included until he’d started to regularly put them away at club level.

He has played 48 games for Sheffield United since he had made that transfer.

He has six goals. His scoring record for his club is shocking.

The Euro squad will come down to 23 players and my understanding is that three of them have to be goalkeepers; that leaves 20 outfield players to pick. We are spoiled for choice in midfield. You’d expect us to have plenty of defenders to choose from and a selection of front men, including those can play out wide. If he is one of them then we’re leaving someone at home who has earned their place just to carry this guy as a passenger.

The media will be in lock-step behind him. Look out for editorials closer to the time – and muppets such as Tanner – claiming he deserves his place because he’s played a role in us getting there, although nobody will be able to defend that by pointing out what actual difference he’s made.

Every article, of course, will describe him as “Rangers daft Ollie McBurnie.”

It is, and it remains, the only “asset” he has … and the hacks love him for it.