Why Hugh Keevins’ Latest Column On Moravcik Is Just As Cowardly As The Original Anti-Celtic Piece. 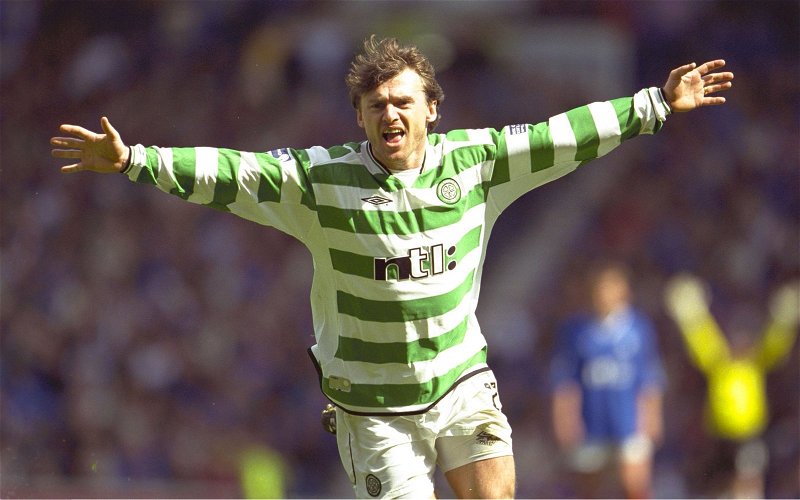 Hugh Keevins used his comic-book column this weekend to offer what, on the surface, was a grovelling climb-down, twenty odd years after the fact, for his historic embarrassment over Lubomir Moravcik, wherein he stated that Celtic had gone for a cheap option on an unknown “pal” of the manager rather than spending more money on a “proven” player like John Spencer.

It might well be the stupidest article ever written in the history of the Scottish game.

But it was also one of the most spiteful, and that’s the taste that lingers decades later, and which Keevins wishes we’d ignore.

He laughed it off, and he talked about how Moravcik has forgiven and forgotten, and even sent him a birthday present recently.

It was a ridiculous column, because he left it so long and seems only to have written it now so that he can talk about how he and the player are mates.

I understand why Lubo didn’t take it personally.

For openers, he is a bigger man than Keevins will ever be, and is sufficiently self-confident that he doesn’t have to worry about what a clapped out hack thought of him or thinks of him now; when he was asked, after he scored his double in the 5-1 thrashing of Rangers which introduced him to Scottish fans in a big way, how it felt to go from “zero to hero” he famously shot back that he never was a zero.

Lubo won over his ignorant critics, and he secured the acclaim that his talent deserved.

Winners do not have to broadcast their greatness; the history reflects it.

There were two elements to what Keevins did and his column doesn’t address either.

The first was that he betrayed a grotesque ignorance of football outside of Scotland, and that alone was shocking in a journalist who dishonestly tried to present that piece as some kind of informed criticism, when it was anything but.

He arrogantly wrote about a player he had never watched, about whom he knew exactly nothing, and assumed he would never be called on it.

He took what looked like a cheap and easy shot, never expecting that there would be blowback from it. If you’ll excuse me for using a brutal phrase, it was cripple kicking, or so he thought, a cowardly attack on someone he never expected to be able to shoot back.

In this weekend’s column, he hid behind the pitiful assertion that it’s all about opinions; in journalism, that’s truly the last refuge of the scoundrel.

Everyone has opinions, but there’s a reason you should not put a delusional fantasist in the same debate space as a Nobel Prize winner; it’s not a fair fight because one brings facts to the table whilst the other flaps like a netted fish.

Keevins is a dreadful journalist because he doesn’t even hide his ignorance.

The ghastly truth is that people like Keevins have an abhorrent view of their readers which assumes that the audience is also ignorant and ill-informed, but he has long underestimated them and he has been caught on this time and time again, such as the night, live on the radio, when he made confident predictions about how one of Celtic’s European opponents would be too strong for us and then couldn’t name a single member of their first team squad when challenged on it by a caller.

The second element to what he did on Moravcik is even clearer; Keevins wasn’t really taking a shot at the player at all, as he couldn’t have cared less about the kind of career he’d had, a fact reflected in his failure to even look into the matter.

The real targets of that article were Jo Venglos and Celtic itself.

This was Keevins waging his personal vendetta against our club and its manager, using whatever he could to bludgeon us, and Lubo was simply that particular weekend’s weapon of choice. If it hadn’t been an article slagging that particular signing it would have been something else.

Bear in mind, this is the writer who when asked to pick a highlight out of his entire career and his body of work wrote not about a scoop of his but about how a doorman booted him out of the Celtic Club in London Road when media mendacity had forced Kenny Dalglish to hold his press conferences in front of the fans.

When Celtic signed Lubo, Keevins saw a chance to have a dig and couldn’t resist it, and he neither knew nor cared whether he was on solid ground or not.

To be blunt, he was blinded by his own malice.

I strongly dislike revisionism in our hacks, because there’s an implication in it which is that we are all stupid and with short memories. Keevins was not righting an historic wrong there, he was attempting to hand-waive his lamentable conduct and his dire journalism by saying “hey, the player has no issue with it, so why should anybody else?”

The real targets of that article never got an apology and they never will.

Keevins showed his true nature with that attack twenty some years ago; cowardly and snide.

This weekend proves that the only things different are the number of candles on his birthday cake.