Lennon’s Latest Presser Is An Insult To Every Celtic Fan Who Pays Part Of His Wages.

Lennon has just spoken to BBC Sportsound. He said nothing that we haven’t heard before. The really important thing to understand from his comments is that this is a guy who has no intention of falling on his sword. He is committed to one thing only; the preservation of Neil Lennon, and he no longer seems to care if his standing with our fans has to be sacrificed with it, along with the season. This isn’t a guy deserving of the least bit of sympathy.

Spare that for your fellow Celtic fans, who are watching this with no end in sight.

I want to go through his comments one at a time. I usually reserve this savage treatment for the press, except on those occasions I’ve subjected Ibrox managers to it. This is the first time I’ve ever done this for a Celtic boss, and my fervent hope is that I never have to do it again. The ideal solution would be for the board to fire the current boss, and then the possibility wouldn’t arise. As it turns out, I feel sure I’ll have to do this again before this is all over. Daizen Maeda: Celtic’s Star Of The Rising Sun Has Just Been Noticed By Europe. 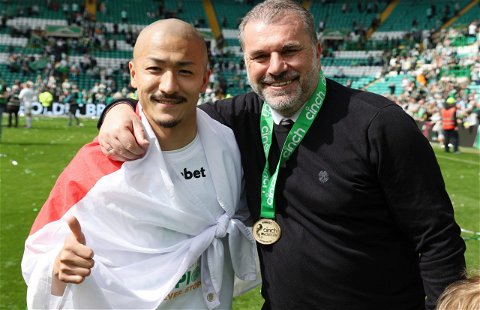 Maeda Stars For Japan, Juranovic Impresses … And Barisic Gets Pelters For A Dire Display.

So without further pre-amble, let’s get on with it.

“I’m annoyed. I’m frustrated. We’re trying everything with them. They’re feeling it, there’s no question of it, you can see that in their body language and their performances.”

You’re annoyed and frustrated? You are? You who takes money out of Celtic every week for turning in this kind of abject performance? You have no idea what the words ‘annoyed and frustrated’ mean. You’ll go back to your penthouse, which Celtic fans are paying for, and put all this out of your head. As to “trying everything” with the players, that’s the kind of statement I expect from a desperately flailing third rate manager without a clue what the problems even are. The players are feeling what? What I see is a demoralised bunch who know they’re on a road to nowhere. I am certain that every one of them would improve by a least twenty-five percent if they thought their leaders had the slightest idea what they are doing. They look to me like a lot of people I know who can’t stand the people they work for or the conditions they have to tolerate every day.

“We need to turn it round very, very quickly. They can do it, they’re capable of doing it. We need a spark from somewhere and we’re not getting that at the minute.”

It’s too late to “turn it around.” The gap isn’t unbridgeable but I no longer believe we’re going to close it. Most fans don’t. Like a lot of Lennon’s other statements, this one is all about “they” and the “they” in this regard are the players who have won so many trophies and titles they need spare rooms to keep their medals in. I have not the slightest doubt that “they” could easily start finding form again, but it’ll be when “you” are no longer turning up at Lennoxtown every day. As for this garbage about a spark, we’ve been hearing it for months now.

“I’ll continue to work as best I can. I’ve done nothing but try to bring success to the club. We’re going through a real bad period at the minute but we’ve been through bad periods before.”

As best you can is precisely the problem, since you don’t have a clue. Your best is not enough. Go now, for God’s sake, and let someone who can do the job in there to have a go at it. As to your latest attempt to burnish your credentials and remind us all of what you’ve done, there is not a manager in history who has been spared the inevitable by such futile and nonsensical appeals to past glory and you are not going to be the first. Your continuing references to this being a “bad period” makes me think you are completely oblivious to how serious this is. We’re past the “bad period” phase; we’re in a full blown crisis here. I feel my blood pressure spike, too, at the constant references to how “we’ve” been in bad periods before. It’s correct, and I wonder why a manager who’s on the brink of the sack for the third time at the same club thinks it’s good to keep bringing that up.

“Can I turn it around? Yeah, of course I can. Will I get the time to do it? Well, I’ve already been told that the club are with me but it’s a results-driven business and at the minute the results aren’t what they should be.”

Delusional. Absolutely delusional. Things aren’t improving, things are getting worse. This constant search for excuses instead of answers, and chopping and changing, and experimenting and tweaking … it’s all symptomatic of someone without a clue. It’s like watching somebody who’s never even seen a car engine before trying to put one together … it might be fun for a neutral but it’s painful for the rest of us. As to the club being with you, if you really believe you can count on Lawwell and Desmond to have your back you are joking. These men are as selfish as you and the second it becomes clear that they aren’t going to survive this unless you’re gone you will be.

“The results aren’t good enough. It will improve, I’ve no question of that.”

And the rest of us have no faith in it. You are starting to sound like a kid who has bought beanstalk beans from a travelling carnival and waters the same area of the garden every single day in the hope to see something grow. It is an absolute fantasy. The only way results will improve is when you are no longer at the club. That day grows closer with every day, but alas it will come too late to make any difference to where we are right now.

“Psychologically, the players are not in a great place. There’s a lack of tempo, a lack of penetration in their play.”

The players are being worn down constantly by your characterisation of them as mentally weak and incapable of following your instructions. They are not the problem here. The lack of tempo is a stylistic affection which is entirely down to you. The lack of penetration is because your tactics are pitifully sub-par and are not up to the sophistication of Sunday League management. Teams know exactly how we play. They have a one in two chance of sussing our formation. They can almost certainly predict our line-up and unlike you, their managers prepare by studying up on their opponents. Only the quality of our players and individual moments of skill are keeping us from a mid-table position. That drains confidence out of the team … but it will be improved when you are gone.

“I’m really disappointed with the result and aspects of the performance. We dominated the game possession-wise again but we looked tentative. I understand that to a certain degree but they need to rise above that.”

Not one iota of recognition for his own failings. Dominance does not win games, goals do. His tactics were shocking. His substitutions were horrendous; after Brown went on, in a baffling change which rejigged the whole system into God knows what, any semblance of team shape we had was completely gone. His final series of them reminding me of watching first time players at Football Manager throwing on attackers without any thought to fitting them into a coherent system or pattern … a better side than St Johnstone would have made us pay a far higher price for that today.

“We had a couple of good chances first half. For me, we’re not working the goalkeeper anywhere near enough. There’s a lack of speed in our play, lack of movement. And we can’t keep a clean sheet.”

If there was a prize for stating the obvious but coming up with no solutions this would win it by miles, and it’s only the same thing he’s been saying since this season started, and since the slump in our form became obvious … way, way before results started to deteriorate. These same failings were being pointed out to him months ago, not weeks ago … months ago. And he hasn’t come close to fixing a single one of them in all that time.

“We’re not playing with enough verve and enough excitement and flair.”

We aren’t playing with a shred of coherence or tactical thought. We aren’t playing in a style the players understand or enjoy. Where is the movement off the ball? The lack of it is down to the coaches, not the players. Game plans aren’t being formulated. The opposition isn’t being studied. Matches are not re-watched to learn would could be done better. More than a dozen times this season, fans have been able to spot glaring holes which Lennon cannot.

The interview continued with Kheredine Idessane trying to get Lennon to talk about his future; this is merely a journalist asking what is on every supporter’s mind, nothing more, and Lennon gave an absolutely astounding response.

He criticised the BBC reporter for asking him negative questions!

“I don’t fear anything, you’re asking all these negative questions Kheredine, you’re asking questions about my job. The club have already come out this week and said they back me, what more do you want them to do?”

Any manager who expected an easy ride after that has lost touch with reality.

If the fans were asking them instead of one of the hacks, they’d be a lot sharper and that pitiful snark would have earned him an even sharper rebuke and not a little bit of contempt.

In this scenario there really is only one thing to do … and the board’s decision to delay it and put it off is the reason we’re in this absolute mess.

Lennon is a man hopelessly out of his depth and I don’t think there’s a single person who can’t see that clearly now.

The real questions should be put to the men who “run” our club.

God knows what the answers would be, and none of us is in a position to ask.

As far as Lennon goes, this sums him up; a man lost up his own backside, no longer capable of even believing he might be responsible for any of this.