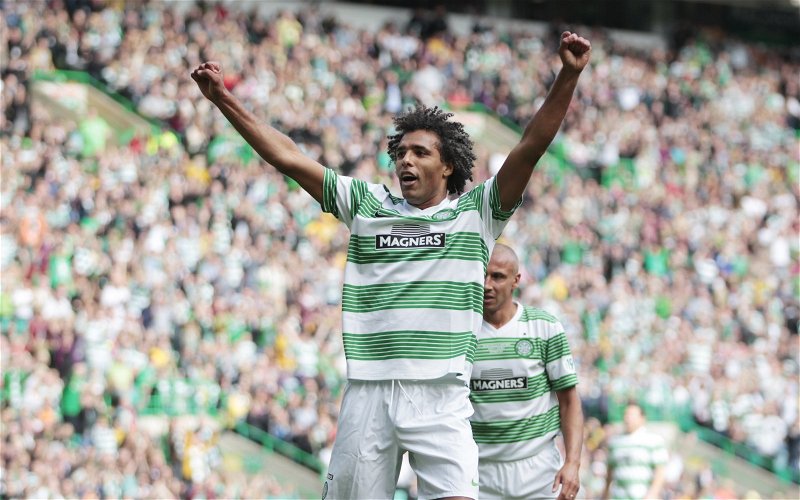 Tommy Burns raised the Scottish cup aloft triumphant at a sun-drenched Hampden Park in the summer of 1995., Six years prior, he had been on the same pitch embracing Joe Craig on the last occasion the club had had cause to celebrate when they won the same trophy.

In between the two occasions the club had suffered heartache, embarrassment, indignity and come close to bankruptcy before Canadian businessman Fergus McCann wrested control of the club from the family dynasties that controlled it from its inception in March 1994.

There would be more ignominy before the fortunes improved as that years League Cup final was lost to then first division side Raith Rovers on penalties. However, something was in the air, change had begun to blow in the wind.

Weeks later the man who would prove to be the Hoop’s hero on that day in May arrived from Eredivisie club NAC Breda and his impact would be felt immediately and to this day; Pierre van Hooijdonk.

Born Petrus Ferdinandus Johannes (Pierre) van Hooijdonk on 29th November 1969 to a Dutch mother, Corinne, and an unknown Moroccan male, young Pierre never lacked paternal influence as he has often stated he views his mother’s husband, Jan, as his father and has no interest in investigating further, “I’ve always said to him ‘if you want to know something, just ask’,” says mother Corrie. “But he never did.”.

It was well known that Van Hooijdonk did not know his actual father, but very few people knew of his real origins. “People in my area knew it,” noted Dutch news outlet AD Monday. “But I never brought it up in the media. I didn’t want to be a showcase during my football career.

Growing up in Welberg, near Steenbergen, Pierre began playing football at the age of 11 and while playing with local team SC Welberg’s youth squad, he took part in a trial on the NAC Breda open day, impressed their scouts and joined the club.

Originally starring as a midfielder, however, he was released at the age of 14, but looking back he feels that the club made the right decision. In an interview with FourFourTwo magazine in 2016 he stated that “At that young age you are living a dream and when they tell you it’s over, you believe it’s over, because you expect them to have the vision to say ‘good’ or ‘not good’ about you. They were right, I wasn’t one of the best midfielders.”

Undeterred Pierre joined Dutch amateur club VV Steenbergen where he was moved to striker and made his entry into professional football at RBC in 1989, scoring 27 goals in the first division in only his second season before re-joining his boyhood team NAC Breda for 400, 000 guilders in 1991.

During the 1993-94 season, the striker scored an Eredivisie record by netting in eleven league games in a row, a record which including the cup matches played in between was a total of fourteen games in a row. Following his debut for the Dutch national team in 1995, he remains the last player to represent the nation whilst playing for NAC.

A total of 81 goals in 115 games was always going to attract the attention of bigger clubs and these displays ultimately caught the eye of Celtic and a £1.5m fee was agreed to bring the imperious attacking force to Scotland.

Scoring on his debut in a 1-1 draw against Hearts at Hampden was an indicator what was to come and although ultimately Celtic would fall short in their bid to attain league glory success remained on the horizon. Victories against St. Mirren, Meadowbank Thistle, Kilmarnock and Hibernian set up a showpiece final in the Scottish Cup against first division Airdieonians.

The 110th edition of the storied cup competition was far from the most glamourous final, however a ninth minute header by Van Hooijdonk was enough to end Celtics barren spell and begin the turnaround in fortunes of the club that would culminate in the stopping of Rangers 10 in a row bid.

Unfortunately, Pierre had departed for Nottingham Forest by this point in a £4.5m deal; however his inability to stop Rangers the previous season as the reached nine league titles in a row is still something that he regrets.

In an interview with the Scotsman earlier this year he confessed that although he laments the fact that the title was to slip away, he is still proud of what they were able to achieve: “Don’t forget, Celtic came from far behind. Tommy was building a new team. Rangers had dominated Scottish football for a few years and nobody expected us to change that immediately. We came unbelievably close to winning the league, but we didn’t. Not winning the league the following season was probably more frustrating because you recognised your own team as being capable of winning it.”

Following his departure from Celtic the Dutch striker would go on to play for a number of high profile clubs, winning the Uefa Cup with Feynoord in 2002 and back to back Süper Lig titles with Fenerbahçe in 2004 and 2005. He was named Dutch footballer of the year in 2002 and was capped 46 times for the Dutch national team, for which he scored 14 goals and played in the 1998 FIFA World Cup, Euro 2000 and Euro 2004.

Finally retiring in 2007 he now works as a pundit for Dutch television; however, the family name lives on his son, Sydney, plays for his fathers old team NAC and is apparently attracting the interest of English Championship sides.

However for Celtic fans he will always be remembered for that glorious, solitary goal in may 1995 that signalled the tide was turning and forged the foundations upon which the current club sits.

Rob McCarry is a Celtic fan and blogger from Glasgow. This his third piece for The CelticBlog.