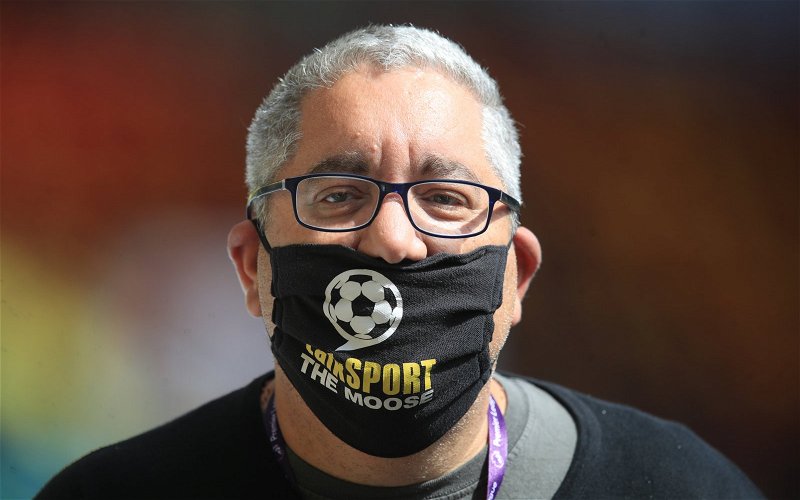 I’m going to keep this brief, for two reasons.

First my good friend Paddy Sinat over at Vital Celtic has already explored this story and done it more than justice and second, the subject of the story really doesn’t deserve more publicity than his barmy remarks have already secured him.

Adrian Durham is England’s Kris Boyd; thick to the point where he could block gamma radiation and with a mouth that runs more erratically than a hamster on a wheel.

He thinks – wrong word – he ranted today that Celtic should be demoted to “League Two” because Scottish football is tired of us, and our grievous sin of going to Dubai is reprehensible when his favourite Scottish club has offered its stadium as a vaccination centre. He clearly reckons Celtic is an evil institution.

Forget that Dubai didn’t violate any rules, so there’s no case to answer there.

Forget that Celtic is not the start and finish of all ills in the Scottish game and that clubs have more to worry about than indulging their imaginations with the Grand Conspiracy Of The Unseen Fenian Hand.

Forget too that Celtic offered up Parkhead as a vaccination centre first … something Durham seems woefully unaware of, perhaps because he spends his life in a variety of poses for Idiot Magazine instead of getting his facts right.

When he comes out with this stuff, as when Boyd comes out with his own rambling, shambling, anti-Celtic nonsense, every reasonable person rolls his or her eyes in dismay.

These are the guys who make even the worst of the bloggers look like monster intellects with razor sharp focus.

Their mainstream media colleagues are appalled by them, because they lower the average IQ in any room they are in.

You can actually feel brain cells dying just listening to them for five minutes.

They know they will never be taken seriously, even when they are being serious.

They are comic relief. They are shock value. They are considered a joke, and the camera only switches to them and the microphone only gets offered to them for the purposes of antagonism and controversy.

But even controversy eludes them because clownish jokers spouting clownish nonsense is not going to provoke discussion or debate; it’s only going to draw derision and scorn.

And this taints everyone who works with them.

Durham is the reason I flatly refuse to listen to TalkSport or any other channel he’s on, in the same way Robbie Savage is the reason I refuse to watch the BT Sports Weekend results show and prefer the professionalism of Sky … except for Sky Sports Scotland which I find nearly unbearable because that’s the village where you can usually find prize idiot Boyd.

I mean, even the picture for this piece sums it up; that’s Ian Abrahams in the photo, but that gag over his mouth is really what I think should be done to the station as a whole, dragged down to the lowest point by one ranting eejit.

Even if it weren’t for the anti-Celtic bent of much of what these goons come out with, I wouldn’t be able to watch or listen to them for long because the era of the bearded lady and the dancing bear, the era of the freak show, was long ago and it was boring even then and that’s what they represent.

And that’s all I have to say about his comments.

It’s all they deserve.