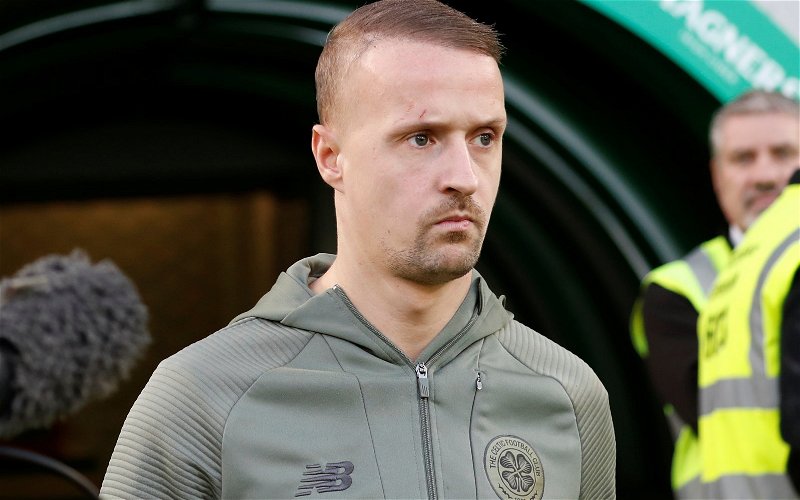 Yesterday, Leigh Griffiths gave us all a sterling example of the phenomenon known as “What the Hell is he thinking and what planet is he living on?”

There have been times, almost too many times to count, when I have quite honestly not known what to make of Leigh Griffiths.

No player has so fully tried the patience of everyone at Celtic Park, including the fans.

Yet time and time again he proves that you cannot write him off.

Time and time he has proved that you cannot fully trust him either.

Reading his latest interview with the media was nauseating.

First up, he’s gone, as so many others at Celtic Park have, to utterly discredited rags which our supporters despise. The message will always be viewed with some degree of reservation when it comes from such a discredited medium.

These same papers were crawling all over him, virtually raking his bins, not that long ago.

The people who stood up for him during that time – the club certainly didn’t say a word – were us, the supporters, the fans, the bloggers.

How dare he blame us for this calamitous season?

How dare he suggest that it was our sense of expectancy that caused this?

His defence of the manager was expected; that’s his pal after all. Few others in the business would have continued to tolerate Griffiths’ off-field lack of discipline.

The fans too have been very forgiving of that, but only up to a point.

We all realise that Griffiths’ chronic lack of fitness cost us at crucial points this season, even if he briefly flared and looked like he may save it. I wonder if this will be the last straw for many fans, some of whom believed he should have been gotten rid of a while ago.

What I find most unpalatable was the sycophantic, and needless, sucking up to the man he calls “Mr Lawwell” like he’s some kid in school or gushing fan-boy.

“Mr Lawwell” apparently won us nine in a row; perhaps you remember that, because I don’t.

CEO’s don’t win football matches, far less trophies and titles. It amazes me how many people still fall for this line that Lawwell and the board are somehow responsible for successes which are the province of managers and players.

What I do know is than in hiring Griffiths’ manager – who apparently retains the support of the squad! Ha! They want to play like it! – Lawwell did more to put our success in doubt than anyone at Ibrox ever did or even could.

And it cost us the ten.

“Mr Lawwell” is another toxic presence at the club, and in defending him with remarks that sounded an awful lot they were lifted from a prepared statement, Griffiths didn’t sound like a footballer giving his own opinion on the club.

Instead he sounded an awful lot like a puppet with the CEO’s hand up his arse, trotting out the party line and insulting the fans into the bargain.

Does anyone inside Celtic Park think we’re buying any of this bullshit?

Griffiths was shoved in front of the press to do a bit of public relations on behalf of his bosses, and like everything else we’ve done on the PR front lately it reeked.