The Media Celebrates Morelos The Thug As They Can No Longer Celebrate The Footballer. 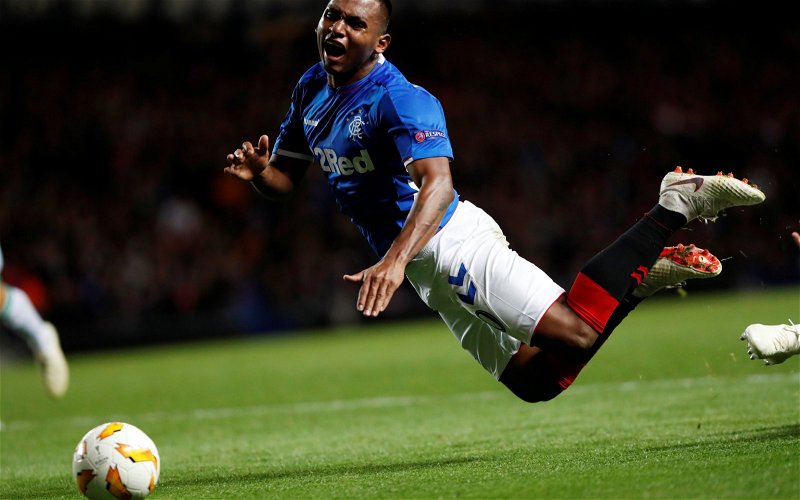 The media is slobbering all over Alfredo Morelos again tonight, in the latest round of “Oh why are you so good?”

They are marvelling at his “combative” style and how much he loves the cut and thrust of these fixtures. And you have to laugh.

Because, man oh man, what absolute garbage that is.

Morelos did today only what he has done in every one of these games since the very first of them; the only impact he’s made has been on a face or a thigh or a knee or some other part of the anatomy of a Celtic player. He’s had more red cards than goals and even if he’d limited his neddish behaviour to a single red he’d still have more red cards than goals.

Alfredo Morelos’ contribution to the cause today was to run up a wing and get tackled by Nir Bitton.

His performance was dire.

Had he been in a Celtic shirt I would have lashed him without mercy for contributing absolutely nothing except to snark and dive and eventually to throw his fist into Scott Brown’s face … and he had to be restrained by the referee who thought Bitton’s challenge was a straight red card offence.

You could not make this up, but if it’s a joke then the joke is on us.

Morelos is not worth writing about as a footballer.

If you were restricted to writing about his performances these days, it would be very thin gruel.

It amazes me that this is still the guy they think they can get a mammoth fee for.

Morelos has been exposed as falling way short of the level they big him up at time and time again.

Which is why the media is restricted tonight to writing this rot about how much he relishes these games. In which he’s done the sum total of nil. In which he has never made a decisive contribution except for hitting the ground at the right moment today. He has not scored a goal. He does not have even an assist to his credit. He has missed a crucial cup final penalty. He has been sent off several times and narrowly averted it many, many times more.

His conduct today was deplorable. As usual.

That he got off with so much, for so long, is a tribute to Bobby Madden as a Grade 1 referee. For the Ibrox club today managed not one shot on goal – something people have been at pains to point out to me, given that it’s an OG that’s decided the game. Not one shot. At home.

Yes, they’ve won the match, and there will be an inquest into that in due course. But for the media to pretend that Morelos made some special contribution today and weaved some special magic or wound our players up –nothing of the sort happened – is just nonsense.

They can no longer celebrate the footballer.

Instead now, they celebrate Fred The Ned, Mad Dog Morelos.

It speaks volumes for how far he’s fallen, and media standards in Scotland too.