Albian Ajeti Will Not Face A Celtic Ban After He Is Found “Not Proven.” 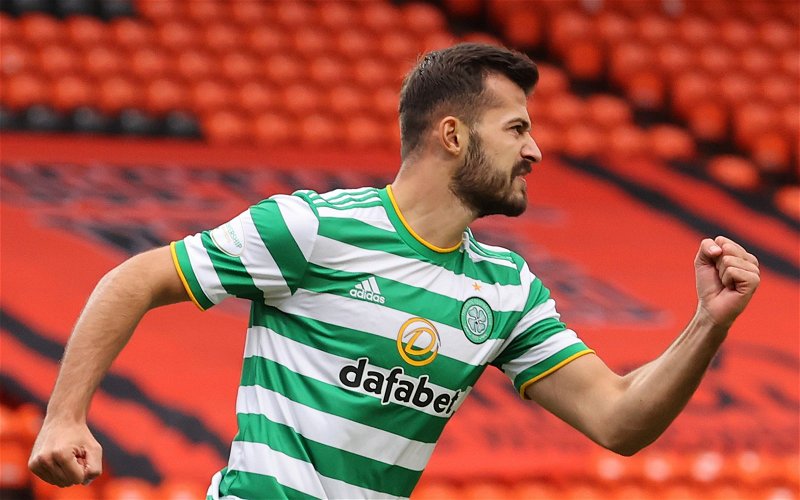 At the weekend, I said that Alban Ajeti would be probably be found Not Proven today, and so it has proved. The very existence of the “not proven” verdict in Scottish football was a joke, but it’s a joke that guaranteed Ajeti could not be found guilty.

The allegation that he dived was “backed” by three ex-refs, and the case sent forward.

That brought with it a presumption of guilt.

But the video evidence made it clear that there was contact.

The contact means that no case of diving can be supported.

Not proven shouldn’t be near football, but it is there, and the Ibrox club has benefited from it many times.

I really don’t care how the media chooses to interpret this; the headline news is that Albian has been cleared to play for us in the next few games.

The SFA should have cleared him, because I think it’s as stonewall a penalty as you’ll ever see, but if the only thing that matters is the result then we’ve got that today.

Half a result, but one which doesn’t impact his ability to play.

So in two cases involving us we got one ridiculous verdict and a one that technically suits us.

The Ibrox conspiracy theorists will howl at the moon. Let them.

The idea that the SFA is institutionally biased against their club is absolutely barking and isn’t supported by the least evidence.

Like the case “for” widespread voter fraud in the 2020 Presidential election, it exists only in the tiny minds of those making the allegation. Celtic fans, on the other hand, can bring plenty of evidence both actual and circumstantial to bear.

The Ajeti verdict brings to a close the media-inspired farce surrounding the Kilmarnock game and the result.

In the week where Gerrard had another rant about refereeing, in spite of the club benefiting from the Morelos decision in-game and then not protesting the two match ban, the press went out of its way to throw a Celtic player into the dock.

Brown was cleared, but the decision to go after Ajeti was clearly a sop to those who had sought to do us harm and divert attention from the thuggish behaviour of Ibrox’s resident nutter.

And today that book ought to be closed.

Ajeti walks, but not with this ridiculous charge stricken from his record.

As I said earlier, what people will remember is that he’s the Celtic player two of our ex-strikers said had dived to win a penalty … and he can’t even claim to have been cleared.

You wait and see how often they bring this up.

He needs to watch out, because they have their eyes on him now, especially as he looks to be one of our first picks next season.