Celtic’s Non-Executive Directors Should Step Up Or Consider Their Own Positions. 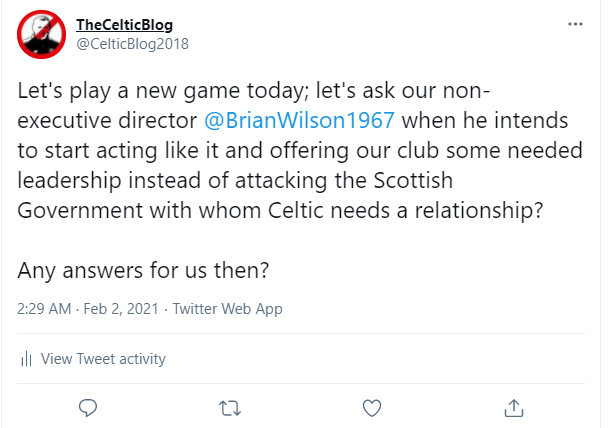 Earlier today I published an article in which I said that he knows better than anyone on the board what anger and apathy can do when unleashed. They sweep away empires.

The one he was part of, that of Scottish Labour, was buried in the 2015 SNP landslide.

Wilson has already been the subject of a lengthy piece on this site.

I wrote a piece prior to that asking what it is that our directors do, because Dermot Desmond seems to act as though our club were a dictatorship and he its Caesar.

Last week, David Low of the Celtic Trust gave an interview in which asked many of the same questions.

I urge everyone to tweet Wilson and ask him when he intends to start taking his responsibilities seriously. Find every member of our board with a social media account and start doing the same to them.

I know that some of them must be aghast at the spectacle of Lennon doing press conferences when he should already be moving onto his next gig.

I know some of them must be horrified as Lawwell continues to harm the football operation with his constant interference and his lack of judgement in dealings with other clubs.

I know some of them must be mortified when they look at the league table.

I know some of them have to be furious by the triumphalism emanating out of Ibrox and its media lackeys and burn to see us back on top again.

Well, I ask them, and we should all ask them; what do you intend to do about it?

We in the blogosphere can express our own frustrations and anger as much as we want; these are the only people who can actually act in a way that matters, and if they are going to continue to sit like mutes in acquiescence as this goes on then I am calling them cowards and frauds who would see our club rot because they are too gutless to speak up.

For God’s sake, they have a responsibility to act.

That’s what the non-executive directors are for; they are there to hold the board itself to account.

They are there to make noise, to ask questions, to lobby and to cajole and to make sure that power is not being abused or responsibilities ignored. Our club is in crisis right now.

What in God’s name are they doing?

If these people can’t, or won’t offer some leadership, if they want challenge the dictatorial Desmond-Lawwell axis – which only has authority because they cede it to them – then what good are they?

What purpose do they serve? What function do they perform?

If they aren’t willing, or able, to do what they are meant to then I think it’s time they all considered their positions and got out.