Celtic Fans Are Hoping That Roy Keane’s Ego Saves Us From Roy Keane. 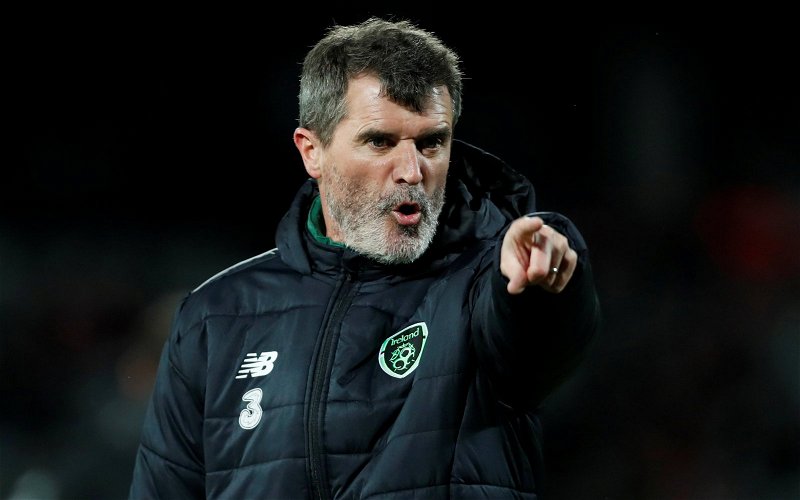 Celtic may or may not be at the stage where talks with Roy Keane are underway, but there are reasons for believing it.

Foremost amongst them is that he’d been offered the job before, at least twice, and turned it down.

Desmond has apparently not changed his view that Keane is a suitable candidate; that, in itself, is troubling particularly as Keane wants it now.

He’ll certainly get an interview if he hasn’t had one already.

With the Nicky Butt story now rampaging across the internet and the papers the worry is that we’re way down the line with this. It might well be that the only obstacle left is Roy Keane himself.

Celtic fan opinion on this is not as divided as I had thought; the general reaction I’ve been seeing on the forums and on social media is one of near total opposition.

Worryingly – for the club – there’s a lot of apathy on the subject, with a lot of people resigned to such a backward appointment and they would consider it proof that this is a board without a clue, run by an egotist who’s alleged global contacts book only has Irish names in it.

As I’ve said to a few people lately, thank God Dermot Desmond is not an Albanian billionaire because God knows who we would have running the club at the present time.

How Celtic fans act should Keane be confirmed will determine season ticket sales.

The fatalism that is settling over the support and the idea that they will appoint who Desmond wants and not care what we think of it, will certainly not restore the sense of a happy family and a club all pulling in the same direction.

It promises to create ever greater division.

Keane will not inherit a happy household, and significant doubts about him will be present right from the start. From Day One. He will not have the benefit of a honeymoon.

Fans will see it as Desmond appointing his pal, as a backward step, and the pressure will be on him almost immediately if he doesn’t hit the ground running and stun us with a great start.

Keane must look at the blogs and forums and realise that far from greeting him with bunting and a ticker-tape parade that fans are more likely to react in disgust and even fury.

Does he want that? Can he handle that? Is he prepared for it? I don’t think you can be until you’ve actually experienced that kind of reaction … especially if it comes as a shock to you.

Keane is an arch-egotist who does not like interference.

There are people at Celtic right now who just cannot help themselves, and I wonder what the results will be if even a stick of the previous regime is left in place.

What happens, for example, if Hammond stays and starts telling Keane that his ideas about signings don’t gel with what the club expects?

What happens the first time he and the director of football fall out, or if he thinks McKay is blocking something he wants?

Keane will want absolute control; is Celtic ready to give that to him?

And would he accept less?

I have my doubts on either front, so it might well be that once Keane hears what’s really on offer that he decides, again, to turn us down.

This is what we’re reduced to; hoping that the man who might be the club’s first choice says no to us so that we can start moving “down the list.”

This is how far the club has fallen in the eyes of the fans, that we want to see another public snub.

This is what happens when you entrust the rebuilding job to the people who made the mess.