At the end of last week, my brother in law asked me to take a look at an article written by Kris Boyd, and he drew my attention to a paragraph within that piece. He asked me if I saw something strange about it, and of course I spotted it right away. 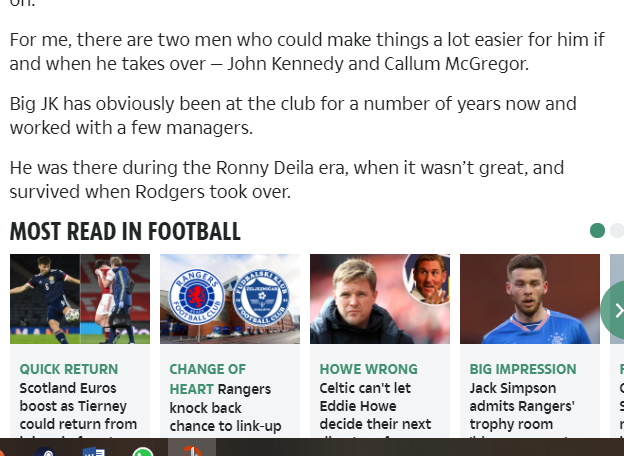 Since when does he refer to our stand-in manager as “Big JK”?

And is it a coincidence that this particular tag has been trending on Twitter for a few weeks, on the timelines of almost every gutter rat who pledges allegiance to Ibrox?

Did Boyd’s tiny mind sweep it off the basement floor of the internet without understanding it … or did he slip it into the article just for the Hell of it?

I wasn’t going to write about this, because what purpose would writing about it serve?

If called out on it Boyd will deny that it’s what it looks like; a low shot at our club and a disgraceful smear on Scotland’s greatest ever manager.

Since nobody can demonstrate intent, and since Boyd is, to use a great West Wing expression, “a .22 calibre mind in a .357 magnum world”, it’s possible that he’s just that stupid, that the primordial ooze which coats the inside of his head and shields his handful of brain-cells has dulled the neural pathways enough that he could write that without seeing it.

Equally possible, of course, is that Boyd is not quite so stupid as that, but that he thinks most of us are and that the “joke” would go right over people’s heads … except for those of the audience he’s playing to.

And I’ll be honest, that’s quite a sophisticated way of operating.

it’s rather like those blue jokes the writers of the original Looney Tunes cartoons used to slip into their work. If you watch that stuff now it can amaze you how some of it ever got past the censors of the time. Indeed, one prominent cartoon writer’s son from the Warner Bros. era claims that they were never meant for children in the first place.

Is that what this was? Boyd giving a little nod and wink to the “wise”?

You know what? I really don’t care.

I’m writing about it, but I honestly don’t care.

The thing that broke my resistance to doing this was a spate of Twitter comments directed at me over one of last night’s articles and which use the phrase.

These Peepul are deplorable.

They are corrupted individuals, the absolute scum of the earth.

I don’t debate these folk, not ever, and I’m not going to start now.

If Boyd is playing these sort of games it’s appalling, and to his eternal shame.

There’s one way to find out, because this was one of two things.

It was either the kind of blind stupidity which confirms him as someone so dumb that Sky should consider hiring the literal box of rocks as his replacement, or it was intentional.

If it was stupidity he will realise that upon being confronted by it.

In those circumstances he should apologise for any offence he caused, and we can all go on as before, with us thinking that the Piltdown Pundit is merely an embarrassment to his employers.

If it was intentional then this snivelling maggot, this wretch, this ring-and-run merchant, this sewer-rat, this guttersnipe, can, nevertheless, slither out of it by pretending that it was an accident and most of us will be content to leave it at that in the interests of moving on.

Of course, if Boyd chooses not to do that then I’d say that those who share a platform with him on Sky or wherever have a choice to make; they can stand shoulder to shoulder with this worm and lend him credibility or they can speak out behind the scenes and make it clear how uncomfortable they feel working alongside a guy who gives pond life a bad name.

Because if he chooses not to man up and say sorry for that, however unintended or whatever it might be, then I don’t want to see anyone with a Celtic connection of any sort chumming it up with this guy as if he’s something other than slime, because that’s what this would confirm him as.

Even those who pledge allegiance to Ibrox, and who knew the great man, or revere his memory, should be outraged by this.

Boyd owes all of them an apology, whether this was intentional or not.