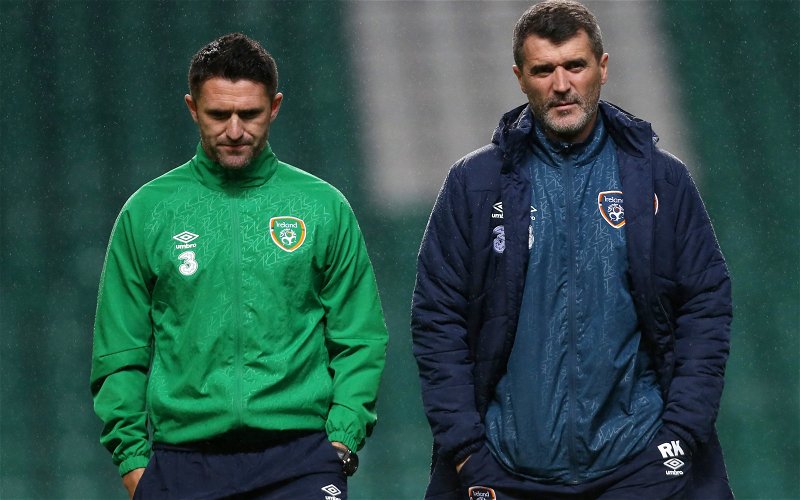 Earlier this weekend, Davie Provan published his latest piece, and I found it quite amusing.

He was pretty complimentary about Eddie Howe, because only morons like Kris Boyd would be anything but.

The manager we’re about to hire is one of the best in the country, and everyone knows this and although it sticks in many a throat there’s no real denying it.

Celtic will pull off a major coup if they can get this deal over the line.

It’s one in the eye to the cynics who said that the club could not attract a high profile manager like Howe unless there was an explicit Celtic connection. It will be a major embarrassment for all those who said we couldn’t compete with EPL interest.

Yes, Celtic have surprised a lot of people.

Provan, who liked the idea of Keane, is apparently not one of them, because he believed that Keane would have been a major coup as well, on account of that famous name. But that name is all Keane really has.

What Provan and others were really looking forward to was the circus coming to town. They salivated at the prospect of watching Keane have to deal with our deplorable press corps.

They wondered how he would react to the first bad refereeing decision.

For many of them, this would have been better than the football itself; in short, they saw the Celtic job as an amusing little side-bar which Keane would have made much more interesting. Provan has long had no respect for Scottish football.

He really would have preferred the freak show to the sight of a manager like Howe lending it credibility.

I have never liked Provan, not for many, many years. I find him patronising and arrogant, and totally dismissive of football across Europe except in his adopted home of England.

It’s been years since he really understood the game up here and even longer since he understood Celtic supporters. This hardly makes him unique, not even when you consider his propensity to mistake his lack of comprehension for wisdom.

But on this one he was about as wrong as he could possibly be.

The assumption he made was that Celtic fans would be interested in such frivolous nonsense as how Keane treated the media, instead of looking past that at his record and comparing it with the kind of managers we always knew that our club could get instead.

See, we’re much smarter and more sophisticated a support, and with a far greater understanding of our club and where it lies in the grand scheme of things, that this joker or many like him believe.

We were told we were dreamers to think someone like Howe would be interested in this backwater, but even if we don’t get this deal over the line there’s little doubt that Howe is on the brink and that is a huge testament to what Celtic still is.

From his vantage point, where he believes that every club with a chunk of the Sky Sports money is automatically a global giant, he sees us a relative minnow.

And if that’s your level then doubtless an appointment like Keane looks good and holds promise. The idea that England’s media would pay us attention was deemed a good enough reason to hire such a man.

Not a name but a reputation and a record.

I understand why Provan doesn’t recognise that. From his lofty perch he misjudges our club and our fan base at every turn. This was a beauty though. Like everyone else seduced by bling he assumed we would be too.

What a moronic mistake to make.

The truly amazing thing, of course, is that we know some people at our club are just as stupid and if a fan backlash hadn’t been threatened Keane might have found himself with the job.

He may still, if something goes wrong with the Howe deal.

The difference is, the fans won’t support it if it does. The clown act doesn’t suit us.

We want to win, and that takes a winner. We know the difference.