Kennedy Seems To Have Accepted The Inevitable, That He Will Leave Celtic This Summer. 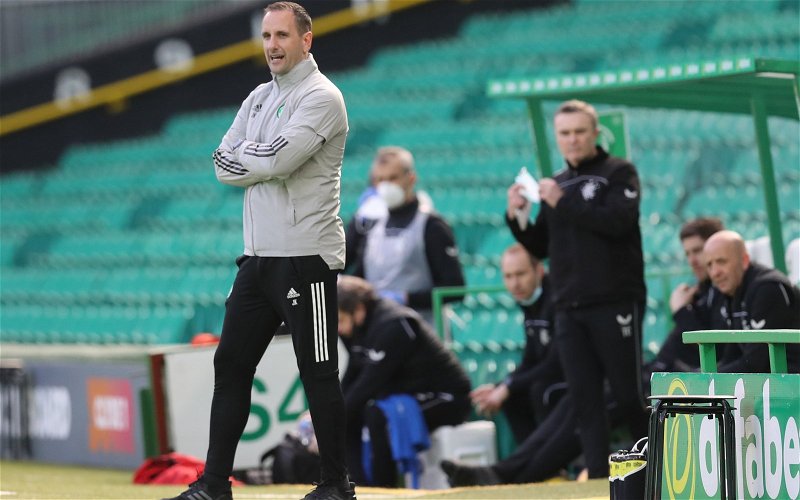 John Kennedy was pretty open in front of the media yesterday about his current relationship with Dominic McKay; they’ve never met.

That seems to me to be a fairly extraordinary statement, but in other ways perfectly in keeping with the way our club is run right now. The guy who was due to come in as CEO in June has never met the stand-in manager.

Only at Celtic could this incredible piece of information pass off as if it were nothing, as something almost normal.

But of course it isn’t normal, because we’re not in a normal situation right now however the board might want to hang “Crisis? What crisis?” up on a banner outside of the ground.

We are deep in trouble here, and everyone knows it.

John Kennedy seems to have resigned himself to how things are, and perhaps how they will be until those running Celtic decide we’re all worthy of information, whenever that’s going to be.

Lennon was sacked at around the same time as the Ibrox Five were done for their rule breach; we’re still waiting for “justice” on that, although it won’t resemble justice when it’s done, so perhaps they think it’s fine to just carry on without the appearance of a care in the world.

In the absence of the kind of clarity that could only come with us making an announcement and his sitting down with the new guy, Kennedy seems to have wearily accepted that his time at the club might be running out.

He knows he will certainly never be named manager; whatever chance there was of that long since went by the boards and if he harboured any hope that the Scottish Cup might represent a change in his fortunes, that too has blown up in his face.

Right from the start, there were people filling Kennedy’s head with nonsense about his having a good chance of getting the gig. Some of them still are. Did he know it was nonsense? You’d think he must have, but either way, those people did him no favours at all, and I strongly suspect some of them were inside Celtic itself.

Yet all of these people had to know that it was simply unimaginable, because the fans would never have accepted that. The Lennon appointment itself made the Kennedy appointment impossible.

In a normal business environment, a company could never make more than one such left-field high level appointment within a 30-year timeframe; Lawwell has done this three times now, twice with Lennon and once with Ronny Deila.

There was no way – just no chance whatsoever – that he could have gotten away with a fourth such decision, even had this season not unravelled as it did.

Lennon took the shot Kennedy might one day have earned. That’s the reality of it. After that disgraceful decision and the anger it sparked at the time a promotion from within was never going to fly when the Irishman left.

I don’t feel bad for Kennedy.

Nobody will blame him for this campaign when he next sits in front of an interview panel. He has experience in the hottest seat in Scottish football, one of the hottest seats in the British game right now and there is much to admire in how he has conducted himself. He has most definitely made this team fitter and a touch sharper.

But he is lacking in critical areas that a top manager needs.

It will not hold him back, because he is at the start of his career, not in the middle of it. He will learn on the job, but that cannot be at Celtic Park and it was never going to be. He now accepts this.

I think he accepts something more fundamental; this place can only hold him back now.

He is an ambitious man. He has had a taste of life in the big chair; not for him the life of Graeme Murty, back in a lesser role at the same club … Kennedy wants more and he’s right to want more, and he’s also right to read the writing on the wall, that things are broken here now as far as his future goes, that he’s never going to have the respect to rise further.

There is a hard streak in John Kennedy, and a sense of grounded realism.

That’s why I really don’t think he ever believed this job would be his.

He may think it unfair, but then Kennedy knows better than most of us do that life is unfair, that it is cruel, that it is often deeply unjust, that it does not always play out according to our hopes and dreams.

And that knowledge, and the determination and courage he as shown at every stage in his career, those things and the ambitions he holds, will probably result in his leaving Celtic Park when this horror show of a campaign finally comes to its end.