UEFA’s Provisional Decision On Kamara Should Not Be The Subject Of Further Hysteria. 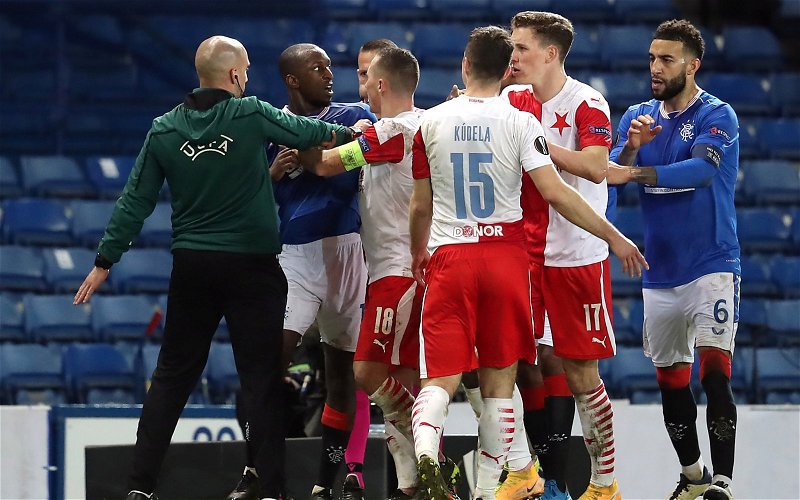 I don’t often find myself disagreeing with Michael Stewart but I have to wonder what he’s doing leading the swell of hysteria over what UEFA decided today in relation to the Glen Kamara incidents.

They have banned the Slavia player for one game pending the results of their inquiry; the ban is for insulting an opponent on the pitch.

They are saying, in effect, that it’s clear Kudela indulged in unsavoury and unsporting behaviour, but that further inquiry is necessary to determine whether or not it was racist.

There is the suggestion that if he’s found guilty on that charge that it will carry a ten match ban.

Stewart doesn’t think that would be enough.

He might well be right; my question is what would be enough?

To punish the club? For what?

For an incident involving a single player, something over which the club itself had no control whatsoever?

Hell, if that’s going to be the standard why don’t we just put points deductions into the regulations for dangerous play?

The problem with a lot of the hysterical coverage of this incident is that those who are screaming for action have never clarified exactly what it is that they thing should happen in these cases.

Do we want to ban players for full campaigns?

That would be appropriate, but is it proportionate?

Are the words that come out of someone’s mouth really more dangerous to football than, say, a face high full-frontal kick assault on a goalkeeper? You see what I’m saying?

There is so much emotion being thrown about here – and it’s an emotive issue, and so I understand that – but not a lot of reasoned discussion.

UEFA has made a good decision here.

It will continue to investigate the racism allegation. It has also opened up a case against Kamara for the incidents said to have happened in the tunnel. Watch that one because I think further cases could follow on the back of that, but for now the wheels at Nyon are turning and everyone should step back and let them turn.

Every one of us wants to see racism wiped out of the game, but nobody has so far proposed a single solution for even reducing its prevalence. This case, like a lot of others, has got a debate going but I’ve yet to hear a sensible proposal.

It is all very well people like Stewart screaming for “more!” and saying that proposed sanctions are not enough.

It’s a different thing entirely to come up with a plan that doesn’t skew the disciplinary system so that a whispered remark is judged a vastly more serious crime against the sport than an act of brutality on the field.

And above all else we need to be careful – very careful – that we are not in the process of creating a system where all you need to get a rival player a ban running into double figures, or have a club kicked out of a competition or to have points deducted, is for one of your footballers to make the allegation against a rival player that he is a racist.

I cannot believe that the dangers of this sort of rush-to-judgement are not apparent to all.

I cannot believe it has to be pointed out that before we go talking about radical solutions that we consider that they might require radical safeguards and a raising of the burden of proof to the point where we’d never be able to prove a charge like this.

What this whole discussion need is for people to take some deep breaths and think things through, rather than rushing towards the spotlight.