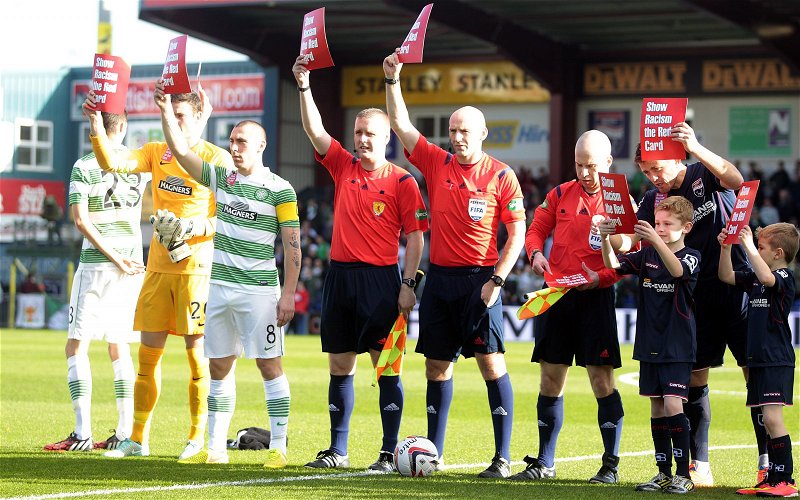 Yesterday, as Celtic joined the clubs and organisations which took the decision to boycott social media, they put something in their statement which the press went out of its way not to notice, particularly in a week where our sites were pressuring them over the unreported and universally ignored incident at Ibrox.

I wrote about that yesterday, at some length.

Celtic’s decision to point out that for years now our players have suffered racist and sectarian abuse on social media was welcomed, and applauded by all in our support.

The club has been accused of not standing up for the players enough on this, but when you see the complete lack of coverage the incident at the weekend got you know it’d be like pissing in the wind.

Nobody has to draw the media’s attention to this … getting them to write about it is a whole different story.

But they all know what Celtic players have been subjected to, none worse, perhaps, than Leigh Griffiths who is the target of more bile than I’ve ever seen directed at anyone except Neil Lennon.

Over the years, the ferocity of the attacks on Griffiths have been extraordinary.

This sometimes does appear in the papers, but nobody rallies round him when it does, except for the club itself.

Scottish football as a whole doesn’t register a flicker of interest.

Even when it does make the papers, there have been journalists – like Neil Cameron – who’ve dismissed Griffiths’ own issues with gambling and depression as if they were somehow the player’s own fault.

As a result, what little sympathy he does get often appears half-hearted and even grudged; virtue signalling, but not anything to take seriously.

His is an extreme example, but not the only one.

Scott Brown too has been subjected to some truly despicable stuff down through the years.

One video, which trended for a while, shows him being subjected to a mind-bendingly vicious barrage of abuse at Ibrox whilst walking from the bus to enter the stadium.

The police, who were standing in a line in front of the guys dishing it out, didn’t move a muscle to arrest any of them … to the best of my knowledge nothing was ever done about that.

Sectarian abuse of Celtic players is so commonplace even the Celtic sites no longer comment on it as much as they used to, although I certainly think we should.

The volume of it ebbs and flows depending on how we’re doing on the pitch; perversely, a lot of the people who engage in this seem to reserve the worst of their bile for when we’re not doing so well, as if this is us being put in our place.

And then there’s the racism; we all know that several Celtic players have been subjected to torrents of it down the years.

In the current team, Edouard, Jullien and others are constant targets of it.

In one ridiculous case not that long ago Scottish football didn’t even react when Instagram banned a racist for abusing Jullien only to reinstate him after he “apologised.”

As horrifying as the act was – and not even the media could ignore that one – there was worse, in my view, which wasn’t commented on at all.

The guilty party was easily identified and punished; all those who “liked” his post or shared his post or praised it got off scot-free and there were a lot of them.

The media never focuses on them, and no-one else does either.

Scottish football’s leaders are slapping themselves on the back for a job well done here, as if they collectively had spent years fighting against hateful social media commentary instead of acting as if they realised there was a problem just recently.

The problem has existed for ages, and for as long as it has Celtic players have been subjected to all manner of abuse.

But most of it has been of the type that Scottish football has lived with for years, the “acceptable” type, the sectarianism which continues to blight our game and our culture which nobody wants to acknowledge far less do something about.

So yes, Celtic were correct to highlight it and I think we should highlight it more, but it went largely unremarked on because in a week where the media silence on the Ibrox incident was louder than thunder, it’s never been more evident that no-one really cares, that they pay lip-service to removing this stuff from our sport.

That’s why I have no problem labelling what most clubs have done here as tokenism; that’s all it is and all it’ll ever be.

If they ever do decide to get real about it, that might be something worth applauding and it will certainly be worth supporting.