Nakamura Was The Magical Player Who Scored My Favourite Celtic Goal. 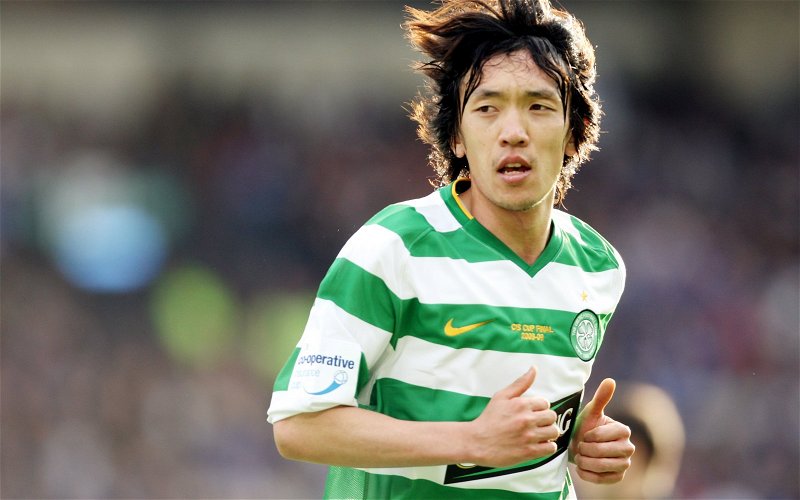 I know I dream about it. I must.

I know I must because I spend so many of my waking hours replaying the moment in my mind, over and over again.

I have seen a lot of goals scored by Celtic players; I have never seen any that is quite like it.

It is magnificent, a pure moment of genius. There is no other word for it.

It is a masterpiece of flawless execution and limitless skill.

It stunned me and everyone else who saw it at the time and it does so no matter how many times I watch it.

What’s your favourite Celtic moment? Some are going to say Larsson’s magnificent chip over Klos in the 6-2 hammering.

I loved that goal, it is such a work of art.

But you know, I think Larsson scored a goal just as good against them at Celtic Park; Agathe crosses it from the right. The King has his back to goal and a Rangers player behind him. He controls the ball with one foot as it comes across; then, as the ball seems to hover in mid-air as though waiting for him, he turns, his whole body, swiftly and hits it on the volley.

He scored a goal better than the 6-2 one at Hampden, in the League Cup.

Just watching it leaves me a little breathless, because it’s nearly impossible what he manages to do.

Beating Bob Malcolm when he’s behind the guy and the ball is in front of the Ibrox defender is hard enough without giving away a foul, but the goalkeeper is nearly on top of the King when he wins it, and Larsson chips it over him as if he’s playing football in the garden with his kid and that’s not even the end of it because although the ball is on a ballistic arc for the net, Larsson dances around the keeper and catches it as it drops on the line, to finish the job.

That is one of the finest pieces of individual brilliance I’ve ever seen and it would be that, and not Nakamura’s moment of pure magic which would be my favourite Celtic goal except what the Japanese genius did was so spectacular that I actually laugh, to this day, watching it, the way you would if you were a neutral admiring a stupefying goal from a Brazilian world-beater.

A lot of people think I’m talking about the free-kick against Manchester United at Celtic Park; they forget sometimes that he scored one just as good at Old Trafford.

They are mesmerising goals, pure Naka, and they prove that for a time we had the best dead-ball specialist in the world at our club. I have not doubted that since that show-stopping strike which stunned Ferguson’s club at our ground and made footballing headlines the world over.

Naka also scored a nearly impossible goal to win us the league with the last kick of the ball against Kilmarnock at Rugby Park. He scored the Lesser Known masterpiece – up there with his two against United – against Motherwell … a stunning goal which hardly anyone talks about because it didn’t come against one of the biggest clubs in the world.

But truly, the goal he scored against Rangers at Celtic Park on 16 April 2008 is far and away the best I have ever seen from a Celtic player and I do not expect to see it bettered in my lifetime.

It was a momentous goal on a huge evening, the one where Jan Venegoor scored in the last seconds to secure the win for us. I remember that evening with complete clarity; my memories of it would not nearly be as strong without Naka’s contribution.

I see that goal in my thoughts probably once every day; a pass to him just over the halfway line.

Like Larsson’s strike with his back to goal, he takes one touch to get the ball under control and just where he wants it, and then he unloads with his left foot.

Now had the goal been about sheer power and pace it would still have been a magnificent strike from the distance he is when he hits it. Any footballer with the power in his left foot to hit the ball with that much speed and strength and beat a top class keeper from 40 yard is beyond impressive, but there is pure, beautiful technique in that goal as well.

Just watch what it does as he hits it; the ball moves in mid-air, bending and swerving so that the keeper doesn’t stand a chance. It’s not just hit with power but in a way that seems to mess with the law of physics.

That goal is pure artistry, the crowning glory of a towering talent.

Naka is in the news right now because The Guardian did a cracking piece on his career, and mentioned some of those goals; incredibly, it omitted the one I’ve spent the article talking about and much of my time since seeing it thinking about. But the piece is excellent.

Believe it or not, Nakamura is still playing the game today, at 42, at Yokohama FC back in his homeland. He still follows our club’s every result. He still thinks back on his days at Parkhead with fondness.

I still think of him the same way.

There are footballers you go to the grave glad to have seen in the flesh; the three best technical footballers I have ever watching in a Celtic shirt are Larsson, Lubo and Naka. I treasured every moment the Japanese genius spent at our club. I treasure the memories of all those goals he scored, some of the best it’s ever been my privilege to watch.

Naka is in my all-time best Celtic XI.

His goal against Rangers is the finest I’ve ever seen a Celtic player score. Just re-watching his highlight reel in the writing of this piece was an oasis of happiness even in a dismal year like this, and it fills me with hope of better days to come.