The SNP’s Tory Rivals Are Playing With Fire With Their Pandering To Ibrox.

The hunting of Hamza Yousef has been one of the most despicable things I’ve seen in a long time. Not so much from the Ibrox fans – which is ghastly but something we’ve seen from them plenty of times before – but from fellow politicians.

It was Tories, mostly, but some in Labour, those who can’t see an empty microphone without wanting their mouths in front of it, have pitched in as well. Labour’s hatred of the SNP is visceral and at times quite horrendous. You can call what they’re doing “political opportunism” if you like, but it’s a dark time to be playing those games.

The Tories are not doing political opportunism as much as they are grandstanding for their target voters. They are pandering to the Peepul. As well as being repulsive to watch it’s also highly dangerous. Playing the sectarian card always is, and they have a long and sordid history of doing it in Scotland, never caring what social impact it would have.

Plenty of their members have come forth to spew venom at Yousef and in defence of their favourite club in the past week or so. Their conduct has been frankly deplorable. Almost all of them have lied about what Yousef actually said in relation to the video, which for those in elected office should be a resignation issue all on its own.

How can these people, with straight faces, slam him for stuff he didn’t actually say when his comments are a matter of public record? I know which sin I’d want to see driven out of public office first. Even if he had said it, there’s jumping the gun and there’s Making Shit Up and the latter is far more corrosive to public trust that the former is.

Just as bad are the hacks – like Keith Jackson, who was repeating it yesterday – who have continued to lie about this and pretend Yousef said something he hadn’t. His point was entirely legitimate; any player found guilty of that should be sanctioned. Only in Scotland could the idea of people being punished for singing sectarian karaoke be controversial.

But then, this was the country whose one-time national coach did it and got away with it.

The real problem the Peepul have with Yousef is the stuff that he did say, all of it on the money, all of it true, about the club and its fans.

The Tories manufactured their line of attack. This is bad enough, but their overall tone during this past week or so has been far worse than anything in the media. They have promoted Ibrox exceptionalism. They have excused the conduct in the square. One of their councillors wrote a deranged piece with a rather colourful anecdote slandering Celtic fans in it.

As a party they know exactly what they are doing when they dog-whistle to “unionists” about what’s “under threat” … this is a rancid appeal for the Peepul to defend their culture, and that tone has been there in everything their party has said in the last week.

I sometimes think these folks wouldn’t care if their actions led to blood on the streets. Perhaps that the objective for some of them, perhaps they think there is political gold to be mined from the chaos. It is a troubling thought, and one that’s hard to shake off.

Yousef says much with which I disagree. His exhortations to the public about the need for Strict Liability were sneaky and exploitative. But he’s a smart man and one who genuinely wants to see this country become a better place.

Even if I didn’t believe that, though, there is something sinister about watching the goons of the right stitching somebody up and society shouldn’t be allowing it to happen.

The same thing occurred in the summer of last year, when it was Neil Doncaster who was being targeted by the Peepul on an entirely false prospectus.

Some of the hacks currently lying about Yousef were in that one up to their necks, promoting Ibrox’s dodgy dossier even after it was exposed as a sham. They have no shame, so of course they found it easy to clamber aboard another bandwagon made out of rickety bits of crap.

But when a major political party and sections of the media are telling a bunch of Peepul who are already angry and self-entitled and have proven a capacity for violence that not only should they have been treated better but that the ruling party hates them and wants to see them crushed it becomes a matter of grave concern for all of us.

What do they think they are playing at? The riots were bad enough as a one off; do these folk want this to be a regular occurrence? The last thing you want to do with dangerous psychopaths is encourage them to believe they can act with impunity.

Do you ever notice that amidst all the noise here that someone is silent? Where’s the party leader on this? The Crap Linesman can’t open his mouth. Because if he stands up for Ibrox every club will be clamouring for him to quit the SFA. I think if someone should be hunted it’s him; as the leader of the organisation defending these jokers his position in untenable.

His silence doesn’t make that less obvious; it makes it obvious that he’s in hiding because anything he does say is going to cause him problems. Someone as “conflicted” as that has to choose which role he plays. It’s time that he was told to make that decision.

In the meantime, we should never forget what the Tory Party has done this past week. They have shown themselves to be the enemies of the Scottish public. They are not just enabling and appeasing the Peepul, they are stoking hatred of the whole left and the independence movement and the dangers of that should be apparent however you self define.

They are reckless and shameless and unfit for government, anywhere. 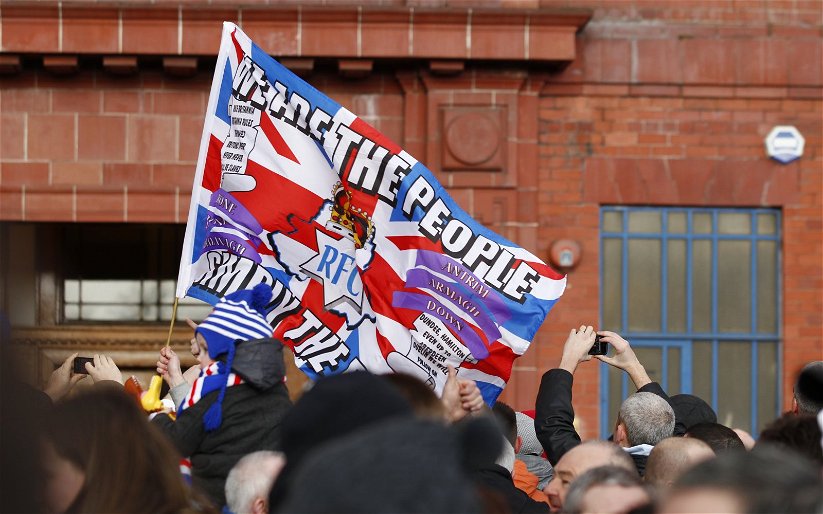