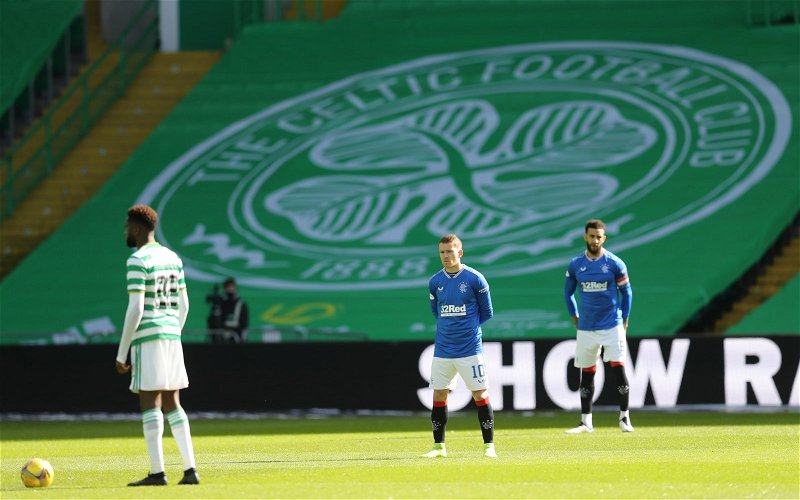 When Ibrox’s fans started to moan about their club taking the knee, I knew it was a matter of time before every club in Scotland stopped doing it. I

t’s always been a gesture with a half-life, and everyone knows that.

But some people have never been keen on letting this run its course, and have been determined to halt it at the earliest opportunity.

Clubs all over England had already caved in to their racist elements in their own supports.

I knew the moment the Ibrox fans started leaning on their board that their club would find a reason to stop doing it.

And once they did, all the dominos would fall one at a time until finally the last club kneeling would quit as the whole thing had been devalued and rendered moot.

Taking the knee might have started as a measure of solidarity with Black Lives Matter, but it became a symbol of the anti-racism message as a whole. It was despicably undermined by hard-core elements in various English fan-bases.

But every time those elements reared their heads the half-life of taking the knee should have been extended a little further.

Instead, one after the other, clubs started to cave into them.

Ibrox’s decision to do the same was inevitable; they were simply looking for a way to do it that wouldn’t have made them look like shit.

Perversely, it took the alleged racist abuse of one of their own players to provide them with exactly the excuse they were looking for.

They exploited that situation.

They took full advantage of it to dump an anti-racism gesture that their own supporters didn’t like.

That gave other Scottish clubs license to do the same.

What I never expected was that we would follow them.

The folly of it has always been obvious.

Standing up against racism?

I spoofed this earlier, writing about a mock press conference, but the truth is more ridiculous than anything I could have joked about. We abandoned taking the knee to do what?

For players to stand instead.

You want to talk about a gesture that has no meaning?

What did players do before they were “standing against racism”?

Did they come onto the pitch and sit down?

No, they stood around and looked at each other … so all we’ve done is pretend to have slapped some meaning onto something they were doing anyway. So my spoof wasn’t really a spoof at all,

it was a slightly skewed version of our twisted reality.

The irony, of course, is that it took playing England to show this up for the utter nonsense that it is.

England’s players were booed by their own fans for taking the knee and the visual of our players “standing against racism” whilst they courageously faced off the bigots amongst their supporters would have been ghastly and would have reverberated around Europe.

As it stands, we’re only planning to kneel for that one game; we’ll see how long that ridiculous phony compromise lasts. How anyone will be able to keep a straight face whilst we go through the pitiful charade of standing in the other two I do not know.

We will embarrass ourselves if we keep up the pretence that standing matters after we’ve very publicly committed to taking the knee to show much that does.

As preposterous as that is, we will also play the Czechs, and some of their players are protesting about the treatment of their countryman, who was the guy banned for racially abusing Kamara in the first place.

Are we really going to stand during that one?

That will make the whole of our country look absolutely idiotic in the eyes of their media, and that’s fitting because a joke is exactly what it is.

Everyone in Scotland knows that Ibrox exploited that situation to ditch kneeling … no club should have followed them, and especially not us.

It was our ludicrous decision to follow suit in this standing charade – made for no other reason to win a few PR brownie points – which legitimised this as our national response to racism.

Clarke even mentioned us in his statement today in an attempt to ward off criticism over Scotland’s wholly inconsistent stance on this matter.

Clarke’s comments are ridiculous; ““I explained in March the rationale behind the squad decision: not only is it consistent with the collective approach from Scottish football but the purpose of taking the knee, to raise awareness and help eradicate racism in football and society, has been diluted and undermined by the continuation of abuse towards players.”

So because players are being abused we’re actually handing the abusers a victory by ditching the anti-racism gesture they hate the most?

The logic is incomprehensible to me and shows Scottish football up as a banana republic who can’t rely on leadership from any quarter.

We should be nowhere near this farce, but our name is all over it.

It’s another example of our board completely failing to think past the next news cycle.

This whole affair reeks. It makes our game look like a backward joke, and the stink of it is all over us.

We needed that right now like we needed a hole in the head.