Ignorant Hack Tries To Tell Celtic Fans Who Our Club Legends Are.

Whatever you think of Neil Lennon, no matter what you believe his status is as a Celtic icon, you have that right.

You are a fan. You care about this club.

You have every right to nominate Rudi Vata to your own personal Hall of Fame if that’s your pleasure.

I might argue the specifics with you, and the merits of some of your choices, but your right to do it and consider the matter closed, whatever my arguments might be, is without question.

You are one of us, Celtic is in your bloodstream.

The other day, Tom English decided to promote Neil Lennon’s latest bitter rant against our fans, in the form of a BBC interview.

He knows exactly what he’s doing, and it drew the predictable response. English, having stirred the pot, then couldn’t help himself by attacking some of the fans who were, very correctly, defending the rest of our support from the former manager.

I mean, he created this controversy knowing what would happen … and then he presumed to tell us – to tell Celtic fans – that Lennon is a legend. 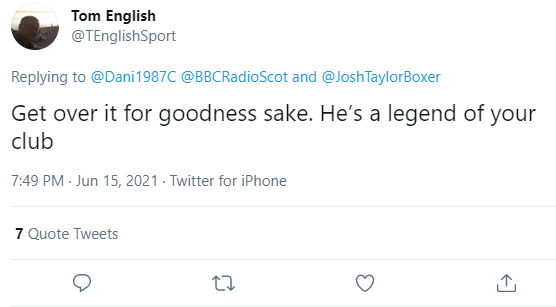 But English is not a Celtic fan.

He does not get to make that call, and neither do the many other ignorant hacks and assorted clowns in the media who have “defended” Lennon on that basis.

Only we get to make that call.

They aren’t really defending Lennon anyway of course; he either hasn’t realised, or doesn’t care, that he’s nothing to them, except the latest stick to beat our club and the fans with.

Many of them have spent years decrying Lennon and hammering him as we defended him from their relentless attacks. The irony is not lost on me; he’s turned on us and they are defending him.

It must make both Lennon and his new media pals feel queasy.

It certainly makes me feel queasy watching them all share the same platform.

The last time I saw something like this was in 2014, when Labour MP’s stood alongside Tories and lectured Scottish voters on the likliehood of capital flight, expulsion from the international order, a collapsed economy and possible armed invasion if they dared put their crosses next to a box that said Yes.

Lennon wants to be careful; these alliances are temporary, and tactical.

I feel the need to explain that to him as tactics aren’t his strong suit.

The media is going to use him and then be back to slagging him off when the novelty wears a bit thin.

But in the meantime, these people don’t get to lecture Celtic fans on anything to do with our club.

It is our fans who decide who the icons are, not some desperate reporter trying to steal a few minutes in the spotlight.