As Ange Was Warned, The Media Is Already Twisting The Celtic Manager’s Words.

When Dave from The Celtic Star warned Ange Postecoglou about the media at the first fan presser, the reaction of the hacks was to call out the whole idea of the bloggers and podcasters being allowed to have that access.

Today, Dave’s point has been driven home in spades with at least two outlets – The Daily Record and the BBC – actually twisting the manager’s words to try and create a situation where none exists.

This is precisely what Ange was warned about, an underhanded and shady tactic born either of anti-Celtic spite or the desire these people have to sensationalise.

What that headline does is takes two separate things that the manager was talking about – the speed at which transfer deals are done and the limitations of the current squad – and cherry-picks the bit that will draw the juiciest quote.

It is a despicable tactic, done to create the perception that Ange was vitriolic and venomous rather than measured and calm.

The Record’s headline suggests that the “genius” line was a direct dig at the board, when in fact it was Ange speaking generally about the situation with the squad.

“It’s a constantly evolving picture. What I do know is we need to bring in a certain number of players. It doesn’t take a genius to figure out. When I look at the squad we are still very light in areas, just for depth more than anything else,” he said.

This is a fairly mild piece of fabrication by their standards, but it’s indicative of the kind of thing our manager will have to face and it’s one of the reasons the blogs need to keep on top of these people as they will continue to do this unless called on for it.

Tom English’s snark was worse; a suggestion that what Ange did today was deserving of some kind of slap on the wrist from the absentee shareholder in Ireland, who if he wants to enter into a popularity contest with the manager would find himself in a bit of bother.

Quite why anyone should care what Desmond has to say I don’t know … not that I think he’ll have anything to say at all.

He might have been under the misconception that Postecoglou would come to heel like others have but I have a strong feeling he’d be quickly dissuaded of that view.

English is being English; he long since ceased to be a serious person and has tried to reinvent himself as some kind of Shock Jock, but he’s too stupid to pull that off except at the level of his hero Kris Boyd. His effort tonight is absolutely pathetic. 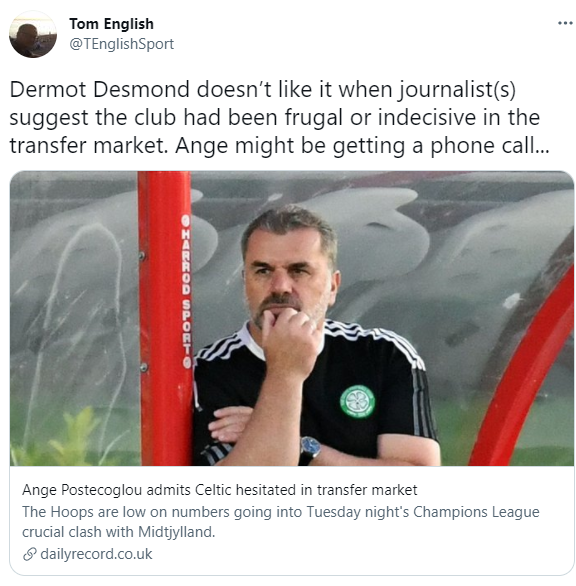 But this is what Ange is up against, and if he didn’t know that already he should look at the coverage he’s gotten today; body language experts like Jackson, Tom English almost begging his bosses to come down hard on the man and The Record twisting his words.

If he didn’t already know how on the money Dave was, he does now.