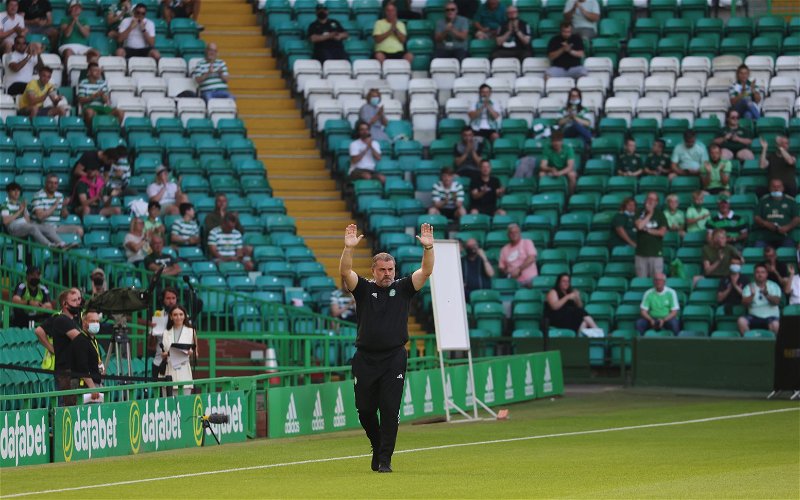 Stories tend to focus on the people who are there, those at the centre of events that seem to be most important.

But sometimes the most essential characters aren’t actually present, and it’s their very absence that is the real tale.

Football in the past year – especially for Celtic – has proven that.

In the classic political drama ‘The West Wing’, the US President doesn’t appear until the very end of the first episode.

The original plan had been to not actually feature the American leader but instead focus on back office events. However so important was he seen to be that the show’s entire premise was changed.

This week saw fans attend competitive football at Celtic Park for the first time in 500 days.

It is – hopefully – another step on the road back to normality.

Football in 2020-21 was a false affair. Leaving aside Celtic’s on-park inadequacies, the sight of big games being played in empty stadiums rendered those events almost irrelevant.

For football to have true meaning, it needs the supporters in the stands. Jock Stein’s adage that football is nothing without fans will never be better proven than the 2020-21 experience.

It was genuinely fantastic to be back at Parkhead on Tuesday.

I went to my first Celtic game 40 years ago; the 500 days since my last visit is probably my longest gap between games, and definitely since I began to regularly attend matches from 1987 onwards.

As a rule it is unlikely many people would describe me as emotional, but as songs rang out at the start and the team took the field, it was hard not to be affected by events.

Some of the time my mind went back to previous visits, to buildings and players long gone.

Jacki’s four goals versus Partizan Belgrade, the noise when Cadete scored his first, countless occasions when Larsson was the hero.

These moments happened decades ago, but their echoes live on and are woven not simply into my memory but the very essence of the stadium.

And that’s what the fans bring.

Memorable football experiences are about more than just what happens on the park.

Players can achieve mastery on the pitch, but it’s fan reactions that ensure moments are etched forever into the public’s consciousness.

That’s why the real story of Celtic v Midtjylland was not the game. It was of course was partly about the people who were there (on and off the park), but, just as significantly, those who weren’t.

Those fans still locked out until restrictions allow more attendees.

Or even those lucky enough to be drawn out the ballot but who could not make it.

And, most importantly, the fans who will never again be back at Celtic Park.

Whether due to COVID or other reasons, for many people, March 2020 would be their final chance to watch the Hoops.

Dads, mums, brothers, sisters, friends; some of them won’t have the chance to cheer Celtic, and to help make the memories that will last long after anyone who was there to see them has gone.

This leaves a challenge to those of us that remain. When you get the chance to go to the game, take it and do so with the same excitement you had when you first attended.

Rekindle those rituals attached to attendance.

Walking with friends, going to the pub, saying hello to the people you sit beside but only ever see at the game. Plus everything else which makes the experience what it is.

And this is not just true of football.

As restrictions ease, ensure you meet up with those friends and family you’ve always said you will meet, but never actually got round to doing.

Only once we do this – and are all back in the stadiums – will normal life, and normal football, truly return.

Then new memories can be made.

And old ones remembered, even if the fans – and family and friends – that helped shape them are no longer with us.

Because even if some people can never go again, the story is still about them, about all the fans that make Celtic – and football – what it is.
After all, we only know that there’s going to be a show.

But it’s not actually when the Celtic are there, it’s only when Celtic’s fans are too.

Matthew Marr is a long-term Celtic season ticket holder. He lives in Glasgow.