Hilarious Record Report Tries To Steal Some Of Kyogo And Celtic’s Japanese Thunder. 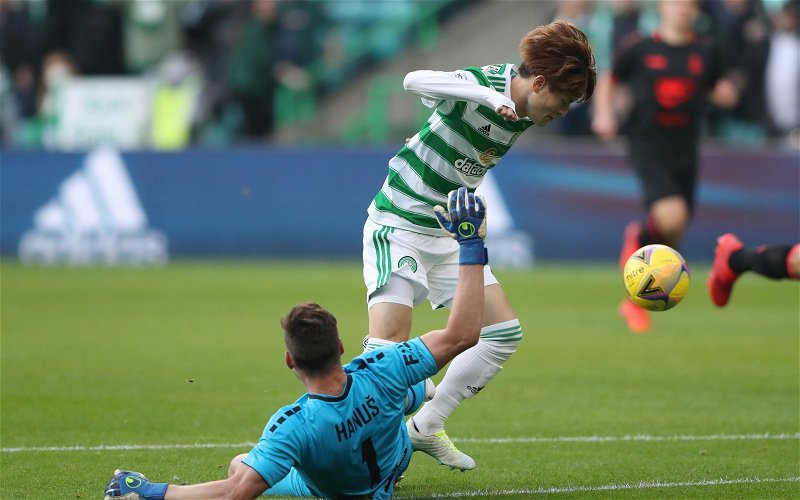 The Daily Record has outdone itself today in a stunning example of not being able to see Celtic get praise without trying to horn their favourite club in somewhere.

It is so bad that it’s hilarious. It is so blatant that it is jaw-dropping.

The news that Japanese TV firms have grabbed up the game at the weekend is hardly a shock. Interest in our league has spiked recently.

I wonder why? An international from their own doorstep, exploding onto the scene, and a manager who had won their national title and who has huge respect for all their customs and institutions, right? Has to be.

But The Record thinks this is The Steven Gerrard Effect as well.

Because Liverpool are popular in Asia.

If you’re already starting to laugh at the obvious flaws in this dire piece, then you aren’t alone.

Gerrard hasn’t been a Liverpool player for 16 years.

If this guy was such a draw, why haven’t these companies being scrambling to show Ibrox games before now?

Kyogo has captured our attention, yes, but he’s also sparked the big interest over there. Ange has too, and his comments the other day on how welcome he was made to feel in Japan, and how good was his time there, means that he’s remembered warmly there.

But rather than admit what is absolutely apparent and not in the least dispute, The Record has tried to re-invent this as the Gerrard Show.

Honestly, this is why we view our press corps with such utter contempt.

This is a ridiculous attempt by a bog-standard third-rate writer to make a positive story for the other late out of something that is not just overwhelmingly about Celtic but completely about us.

You could not make this up. This lot have no shame whatsoever.