If Celtic Doesn’t Speak Out About Refereeing We Can Write This Season Off. 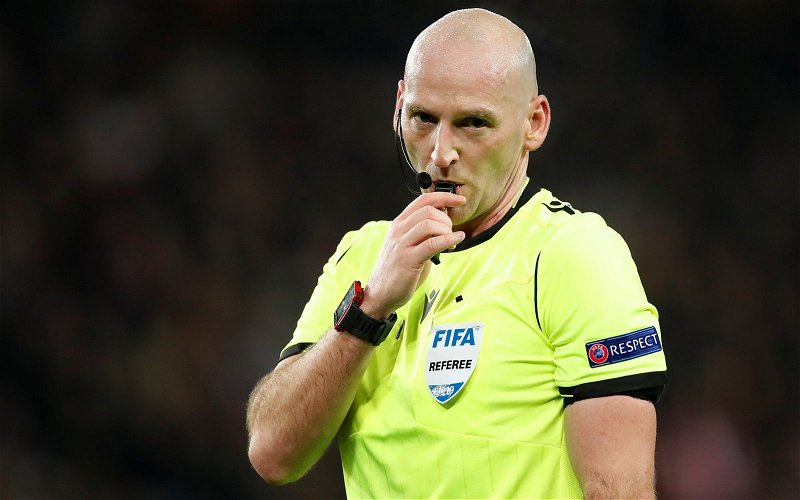 Amongst some sections of our support, there is a natural tendency towards not wanting to face the awful truth that we’re in a sorry state right now.

There are Celtic fans who will look for every external factor which might have a hand in where we are, which to me does nothing more than give people inside the club a free pass that they don’t deserve.

We can all be realists about what happens inside our walls though without ignoring some of the things we have to face when the team steps out onto the pitch.

Yesterday we were up against a Hearts team which played without finesse, which kicked and nipped and niggled and dived and rolled around the pitch pretending to be injured and thus wasted plenty of time.

And we were also against officials who allowed them to get away with it, and who at the same time stopped us every time they got a chance, punishing every 50/50 ball we won with a foul.

We were the team who had 74% of the possession. In the same game, more than two thirds of the fouls were awarded in favour of Hearts.

To cap it off, we scored a perfectly good goal which was inexplicably flagged for off-side and which Sky couldn’t even be bothered to take a second look at during the game.

The Celtic fans like Michael Stewart, and not for nothing.

But he was dead wrong to say yesterday that we should be good enough to put bad decisions in the rear-view. When decisions are that bad they can’t just be waived aside.

When they’ve had a quantifiable impact on the result – the decision to chop off our goal would have put us 2-1 up at a time when we were ascendant – they cannot simply be dismissed as objections to cover a painful defeat.

Bad refereeing decisions change games, and aside from the goal that wasn’t given was the failure to send off ex-Ibrox thug and professional hammer thrower Halliday, for a disgraceful challenge on McGregor.

This follows a pattern too obvious to ignore.

If that results in a retrospective red my friends online tell me that it will be the fifth time such a decision has been made after Madden showed “leniency” to a player who viciously hacked a Celtic player on the day.

That is astonishing. So is our club’s silence on it.

Ange had enough on his plate yesterday without focussing on the performance of the officials, but in the cold light of day, I believe he will be incensed when he watches the match in review.

I believe he’ll recognise Madden’s species of officiating right off the bat.

In his first meeting with the fans this was the first question; for everyone who sneered at that question and the need for it, well yesterday was for you. It’s wake up time for everyone at the club.

Silence is not our friend here, these things have to be called out.

We should have beaten Hearts yesterday and I don’t want to hide behind the officials when it’s clear that our own club has the real questions to answer, but let’s not ignore the elephant in the room; we’d have taken at least a point from that game had the goal stood, and probably three had Halliday been shown the deserved red card.

Those decisions, along with the awarding Hearts free kicks every time our players won the ball from them, had a material influence on the final score-line … and if we’re not willing to defend ourselves in an appropriate manner these decisions will go against us over and over again.

They should have been called out yesterday in Ange’s after match presser.

We must not allow them to go uncommented on for the rest of this week.

When Ange next appears before the press he needs to fire a warning shot loud enough to be heard in Australia.