Is Edouard Seeing Out His Contract Bad For Celtic? It Depends How You Look At It. 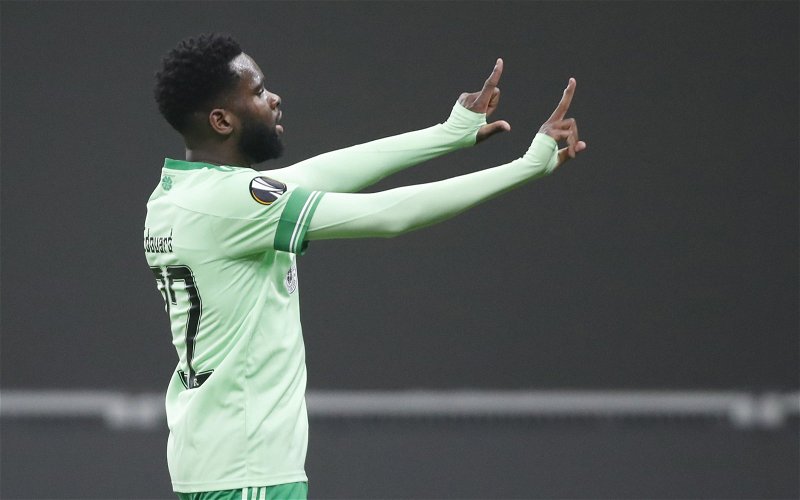 Ever since this window opened, we’ve been waiting on the sale of Odsonne Edouard.

Still, he lingers on at Celtic Park.

Interest has been patchy, much of it only tentative.

Clubs have been stingy in making their offers. Some have been put off.

Others, like Rodgers’ Leicester City, were chancers who thought the global health crisis had left us weak and vulnerable and desperate enough to take whatever they put on the table.

Edouard has remained a Celtic player, and we seem in no rush even as the contract runs down.

There are ten months of it left.

Most agree that we need to sell him in this window if we’re to realise a decent fee.

But we can’t force that.

Those in the media screaming at us over this as if we’re somehow to blame for the lack of interest should shut up and step off.

We can’t invent offers. We can’t conjure them out of thin air.

If clubs fancy Edouard they have to make themselves known.

The latest to allegedly express an interest are Crystal Palace. According to reports this morning they are actually willing to pay what Celtic want and what Edouard wants, that whopping salary we wrote about earlier in the week.

If it’s true then great, we move forward and he moves on.

If it’s not true then great, he stays and we enter the last two weeks not knowing what the situation will be when the window finally closes. Not ideal. But he has looked better in the last couple of games, so keeping him until at least January might not be a disaster, except in that he’s then free to talk to whomever he likes and we get nothing.

Chris Sutton is actually the first of the media personalities to suggest that losing out on a big fee for Eddie might not be the end of the world. After all, if he stays for the season and hits that 100 goal mark and in the process we win the title then that man has paid back every penny of his £9 million transfer fee and then some.

Edouard has been worth the money we paid, and it’s only if we see this as a profit making endeavour that we start to freak out a little bit.

If you see it as Edouard being brought to Parkhead to play football, first and foremost, then perhaps one more year of him gets us the full value for our money.

Earlier on, I wrote about Celtic’s transfer policy and how it has given us an advantage over Ibrox.

Keeping Edouard for one more year isn’t an abandonment of that policy any more than it was when Boyata ran down his deal.

With Eddie we’ve tried to please everybody.

Keeping him last season was a gamble, but would it have been less of a gamble to sell him with ten in a row up for grabs? Every fan I know would have been raging had we done that, and Celtic’s mistake, if you can call it that, was making securing the ten the primary goal.

The primary goal this time is isn’t just the title but what lies on the other side of it; guaranteed Champions League Group Stage cash.

Selling Edouard will give us the cash to complete the rebuild with a couple more quality players, but keeping him would leave us with a front line that no club in Scotland should realistically be able to handle.

Imagine Edouard scores a couple at Ibrox later in the month and we move in front of them in the league?

The psychological blow of that might be enough to shatter their fragile confidence completely, and then we might just coast to the title. Edouard could be decisive in such a campaign, and then when he goes you have the consolation of knowing that his goals and performances went a long way to handing us that enormous bounty.

As it’s worth twice what we’ll get for him you have to consider whether we’re stronger with him or without him.

If you look at this as a purely footballing matter, then it’s hard to think of a forward out there within our price bracket who is as good as he is and who we could attract. Say whatever you like about his form at the end of last season, but on his day Edouard is a superlative football player who would enhance any forward line.

There aren’t many of us who would have that as their first preference here; most of us want to see Edouard go so that we can reinvest the money in two or three additional players, enhancing the whole squad.

But as that matter is largely out of our hands, in spite of those in the media who will attempt to blame us for it if he stays, we need to consider the upsides and they exist.

Sutton has grasped it and called it a “win-win” for the club, and he’s right.

Because Sutton isn’t looking at this like a bean-counter whose concern is that we “lost” out on big money.

Edouard cost us somewhere between £7 million and £9 million after add-ons and we got plenty for it. Sutton sees it as a fan, and he’s thinking about what Edouard can still offer us.

Imagine that Eddie gets us another cup winning goal.

How do you put a price on that? If he shoots us to the title, then it’s job done.

I think Eddie will go.

I think it’s in his best interests and ours that he does so.

But I will shed no tears if we have him on the books for one last campaign, one last shot at glory, under a manager who knows his value and how to get the best out of him.

This might be a gamble we can’t lose on.