Sometimes I think there is a part of our sporting media whose anti-Celtic malice has driven them quite mad. One of the reasons so many of us are appalled at certain fan media cosying up with the Newsquest Group; a few of these people are in their ranks.

Look at this for a nasty, spiteful little headline. 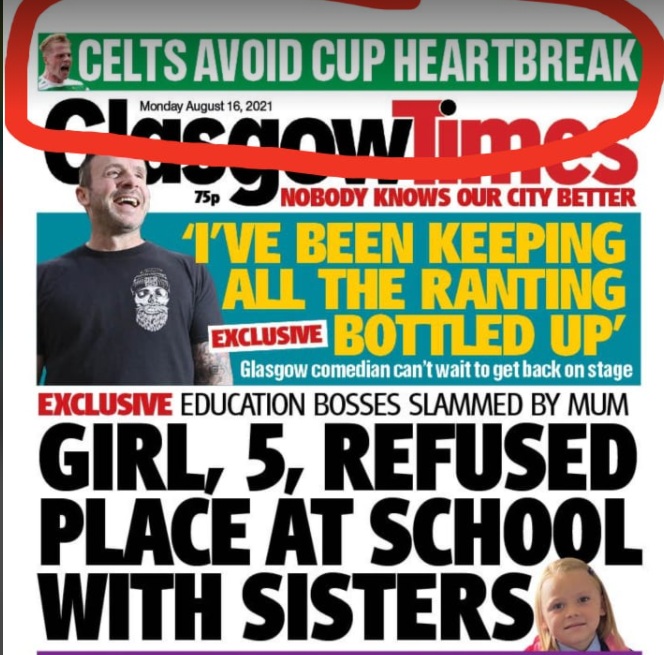 It’s a little thing in the grand scheme, a small matter which some will see as of relatively little importance or significance. But it’s a measure of the low-level malice which exists, the smallminded pettiness of some out there when it comes to covering us.

At the heart of that headline, of course, is an obvious lie.

I knew when Hearts scored their second goal late yesterday that there would be some folk who would see it as an opportunity to promote the idea that the game was much closer than it actually was.

I’m just not sure who this odd attempt to shape the narrative from yesterday is designed to benefit.

Making the game out to have been a genuine contest as opposed to the one sided beating that it was might give some folk a wee jolt of happiness but in point of fact it makes no material difference to the outcome or to the facts; we were absolutely brilliant.

Hearts simply could not live with us in that first half, and this is before these players have even gelled properly to develop the understandings that they will in the course of the season. In the last four games we have scored 13 goals and created more chances probably than in the first half of the last campaign. We were relentless.

I was hugely disappointed with that late goal, as I’m sure Ange would have been, because it made that result look respectable when in fact it was a much wider gulf than even 3-1 would have suggested.

Anyone who watched it knows that.

Our dominance was such that it has caused some of these people to re-evaluate their pre-season predictions, which weren’t just that we wouldn’t win the league but that we might even finish further behind than in the last campaign; a nonsensical shot in the dark based more on their own prejudices than any real understanding of football.

Those who are willing to look at our performances in the cold light of reality can see clearly that something special is happening with Celtic. Ange was right to be so effusive in his praise yesterday for how his ideas are being translated into performances.

Even those who don’t want to see, or acknowledge, what we’re doing will soon have to because we are only going to get better as time goes on.