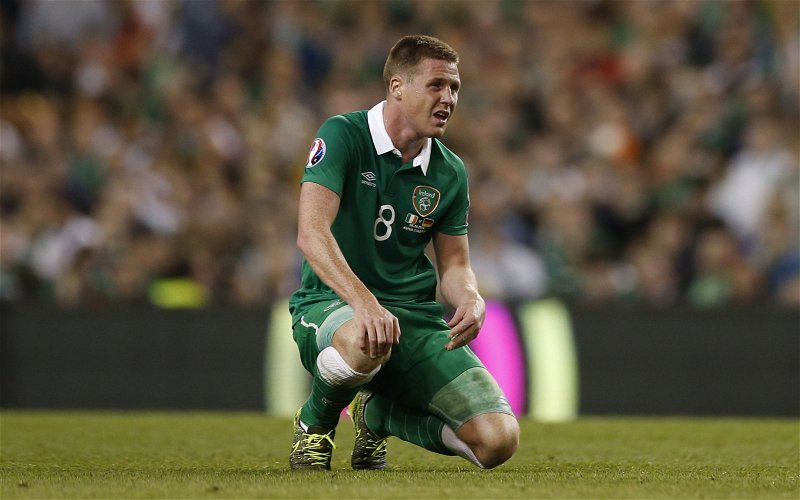 The reaction to the Athletic piece on James McCarthy has been a mixed bag across Celtic social media, with a lot of people speaking up for the journalist in question and the outlet he writes for.

This is fair enough I guess. We’re not, after all, talking about a tabloid hack here.

For all that, I am not in the least bit conflicted when I say that if this guy does have dressing room sources that they are selling out our club.

The argument that fans want to know what goes on inside Celtic goes only so far; if someone, in pursuit of an agenda or to make themselves look smart, is giving information about goings on in our dressing room to a journalist then that person is harming Celtic, and that’s true whoever the journalist is and whatever the outlet may be.

The truth is, if fans knew half of what went on inside their football teams they wouldn’t sleep at night.

This article harms one of our players, a player who is trying to get up to speed with training under a new manager and under new conditions.

The fact the journalist held off on writing it because it didn’t fit the stories he was trying to tell on a given day and then further until he had a second source on it is being held up as proof that this isn’t a hatchet job.

But how do the conditions under which McCarthy’s performance in training then compare with those now?

Did nothing change in between the journalist hearing the story the first time and writing it?

Ange has praised McCarthy in training.

He’s given the captains armband to Joe Hart, who according to the same report, he didn’t fancy as a signing.

The laziest form of “journalism” in this country is to say that the Celtic manager has had signings “forced on him.”

Does this guy come across like someone who would tolerate that?

The problem most of us have with the article is that it’s gossip. Journalists too often print what their sources tell them without ever questioning why their sources would bother. Is this people settling scores? Seeking alibis? Making trouble for the sake of it?

The one person at Celtic who is actually communicating with the fans is the manager, and this sort of stuff completely undercuts what he’s trying to do.

In an exchange of information between a source and a journalist, there’s usually a power trade as well, something that goes largely unspoken. To put it bluntly, it’s often the case that someone is getting taken for a mug. If I made one assumption yesterday that might not stand up it’s that the writer is the one doing the using. But that might not be true.

My problem with this is that I’m just not sure who benefits from a weeks old rumour being pushed into the mainstream because James McCarthy had a bad game at the weekend.

If Kyogo comes back and doesn’t hit the ground running will we be reading about how he missed a penalty in a bounce game the day after he arrived?

Someone inside Lennoxtown has allegedly given information to a journalist which undermines one of our footballers. That’s the story, that’s the bottom line, that’s all this is. Whoever talked to the guy has caused days of negative headlines about one of our footballers because he’s not quite fit enough to keep up with the rest.

What is that but damaging?

People can try to justify this all they want; this hurts Celtic and whoever did it knew full well, or ought to have known full well, that it would. And so that person’s motivations are suspect, and ultimately less interesting to me than that they get identified and punished.