Why Is This Press Letting An Ignorant Bigot Lecture Us On The Use Of VAR? 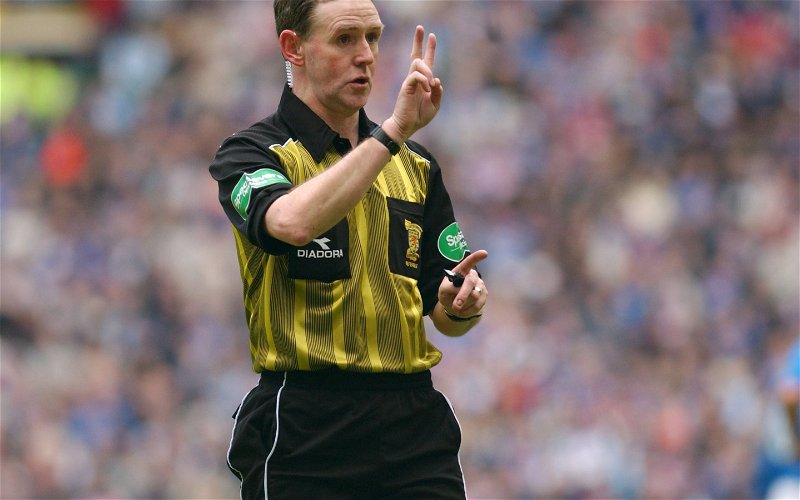 I don’t care what job Hugh Dallas has at UEFA.

As far as I’m concerned, his employment there means that either the SFA lied to them about why he was terminated when they gave him the inevitable reference or their own anti-bigotry agenda is a smokescreen whilst they employ the worst sort of people inside their own walls.

Hugh Dallas is a bigot. He was fired for being a bigot.

Furthermore, he used the moment of the referees strike to try to engineer himself an escape from the disciplinary hearing which was due to decide that. Hugh Dallas is everything that’s wrong with Scottish football and he is everything that we need VAR to counter.

That The Daily Record thinks it is appropriate – and that the PLZ Football Show thought it was appropriate – to ask for his views on VAR is scandalous.

How can we take the rags seriously when they try to lecture other countries and other associations on this stuff when this man is still feted and treated as someone worthy of our respect?

Dallas ought to be a pariah around the sport in this country and that he isn’t tells you everything you need to know about how seriously those involved in it really take racism, sectarianism and bigotry.

Dallas is a disgraced figure.

Nothing will change that. Not even ignoring it.

His comments on VAR are risible, by the way.

If it’s not to decide those things then I have to ask what the actual point in installing it at great cost to our clubs is in the first place?

I have seen VAR be used to give rulings on those very issues; the clue is in the name. Video Assistant Referee. For someone who’s supposed to be a senior official at UEFA he doesn’t seem to have the first clue about this stuff, or he’s deliberately misleading people.

There are four categories which VAR can assist a referee on.

You ready for this Dallas? You paying attention? Here we go.

1) Goal / No Goal.
2) Penalty / No Penalty. So there’s one right there.
3) Direct Red Card. And there’s the other.
4) Mistaken Identity Involving Red Or Yellow Card.

So what in God’s name is this halfwit talking about?

Even if it were somehow legitimate to seek the opinion of someone who left this game washed up and scandalised for his bigotry it’s surely not legitimate to let him simply talk garbage? Are the people on that show too damned lazy to look this up?

Are the staff at The Daily Record too damned lazy to look it up?

Honest to God, the more you cover the media the more rancid you see that it is here in this country.

On no account should we be seeking the views of such a man, even if he has his facts correct or didn’t appear to be engaged in wilful deception.

The debate over VAR did not need his input.

It certainly does not benefit from what is either his colossal ignorance or utter dishonesty.