Celtic’s Walter Smith Response Should Be The Moment Certain Peepul Get A Grip. 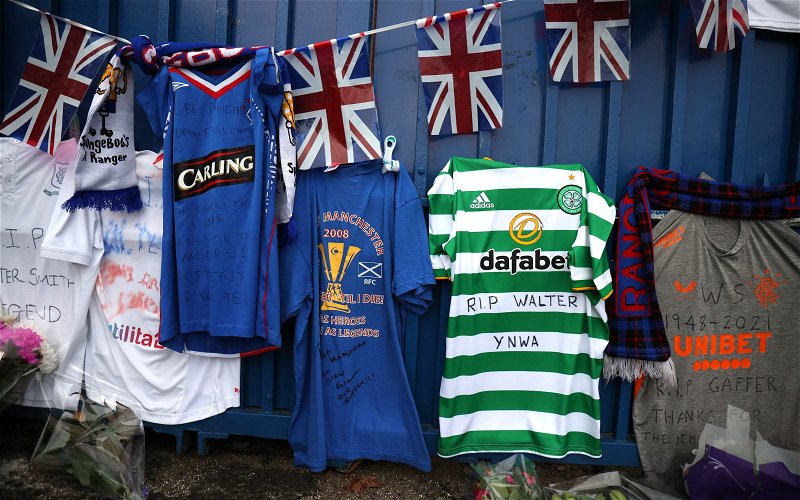 There is a story about Julius Caesar which I’ve always found instructive.

After Caesar triumphed at the Battle of Pharsalus, Pompey Magnus, his great rival fled to Egypt. No sooner had he arrived there but he was murdered, and his severed head kept as a gift for when Caesar arrived with his armies.

When Caesar was presented with it in the palace at Alexandria he was appalled, and furious.

When he was given Pompey’s signet ring he openly wept.

Although enemies, Caesar had the greatest respect for Pompey as a man, as a general and as a fellow Roman.

It’s been on my mind these past 24 hours.

In that time, I have been heartened by the response of Celtic and our supporters to the death of Walter Smith.

I expected nothing less, but it gladdened the heart just the same.

We are, and have always been, a tolerant, accepting and even forgiving club and fan-base.

We don’t hold onto ancient grudges. We don’t exist to serve the causes of hate.

Hate takes up more and more of our daily discourse.

I am often accused of hating the club that plays at Ibrox.

The truth is that I don’t. I hate various things about it. I hate the lie that it’s built on, the bigotry that supports it, the scum which it can’t seem to rid from its stands and the contempt in which its directors hold the rest of the game.

I dearly wish it would cure itself of those afflictions, and then it could be just another club in this country, a bigger one than the rest and so a proper rival to ours with that rivalry built on mutual respect and a shared city.

Different cultures don’t have to hate one another, except when hate is the foundation stone for one of them, hatred of the other.

To break the cycle of hate you have to stop seeing others as the enemy.

You have to stop looking at the world through the prism of your own prejudices.

For years now there has been an element – a large element, not a “small minority” – of the support across the city which views Celtic as an evil, corrupt institution.

You don’t have to be a Celtic fan to recognise that as sheer nonsense. But haters have to hate, and their view of us at the centre of a vast conspiracy which seeks to eradicate them and their “culture” is one that ought to be challenged over and over again.

Ask the deranged element of that support where its hatred for all things Celtic comes from. Then ask them to look at our directors today, placing a wreath at their stadium for their fallen icon. As we’ve done, by the way, for the dead of the Ibrox disaster year on year.

Today they are going to find their hatred very hard to justify. Because it is built on nothing but prejudice and pig ignorance, and if there was ever a time for challenging that, for challenging some of the nonsense inside their own heads, this is it.

There is no reason – there has never been any reason – why the Ibrox club and ours could not co-exist as mere opponents.

Ditch all this “Old Firm” baggage, based on mutual loathing … we did, years ago.

The toxicity that surrounds the rivalry is a nightmare construct part fed by the media and part fed by a fan-base which seems like it can’t let go.

But let go of what? What is their grievance here? What do they think we did?

The problems that beset their former club were made inside its own walls.

One of the architects of those troubles was Smith himself, a man who spent money the club didn’t have and fought the bank who were running it during his final year because he wanted to spend more.

Any reckoning with the guilty should start with those who actually had some responsibility.

Likewise, the rest of the clubs, whose own directors and managers and former players are paying their own tributes to Smith today.

What exactly was their crime against Ibrox, the one for which so many of the fans over there are still uproarious today?

The rules say that any new club starts at the bottom of the pyramid.

A lot of those fans who cry foul today supported that idea at the time.

You know who else did? You know who accepted that they were a new entity and wished them well? Walter Smith. So hate us, and hate those other clubs as you will, but don’t pretend that the man you are honouring today saw it any differently because he didn’t.

The hate is needless. It is groundless.

There is no purpose to it, except that I suspect that it gets a lot of Peepul out of bed in the morning.

But surely it’s time to let it go?

The death of Walter Smith has rocked their entire support. But it has had an impact way beyond their club and the respect with which Scottish football as a whole, and Celtic in particular, has shown at this hour should – must – be the moment some of them take a good look at how they view the rest of the game here, but in particular Celtic, our club, which has not been bound by bigotry or pettiness or rivalry and has simply acted with great decency, a club filled with people who respect the man, his achievements and his stature in the game.

That he was also our deadliest foe matters not one bit.

If they want it to be, this can be a moment for progress, something that would honour the memory of the guy who carried Tommy Burns coffin, something in that same spirit, which every person and newspaper has paid tribute to Walter Smith for.

If they take off the blinkers they may be surprised by what they see.