Striker Long Linked With Us Is Good At What He Does, But He Isn’t Celtic Class. 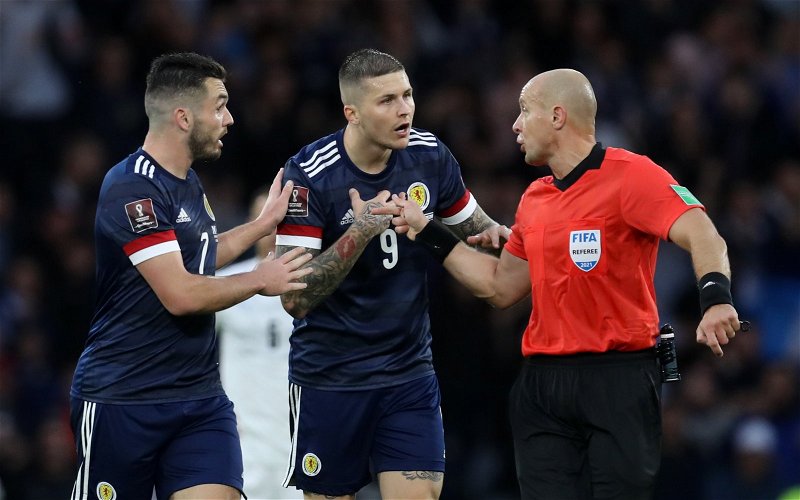 Watching the Scotland game the other night, I was interested to see how Clarke lined up his forwards.

Although he’s sometimes accused of being negative, he usually plays with two strikers and I thought the interplay between them was one of the most positive parts of the performance. They complement each other very nicely.

We have long been linked with the two of them, although Adams only briefly. The links between us and Dykes lasted longer and were taken seriously by a lot of people who seemed to think that he held the answer to same age old Celtic question.

To be honest, watching him the other night against the Czechs I actually thought he was pretty damned good.

I thought he was good for his goal which was a classic example of a big commanding striker muscling his way to a finish. It would have been a travesty had that goal been chopped off; he was perfectly entitled to go for it and met it brilliantly.

He missed a penalty too of course, but overall he was very good.

The question naturally arises; was I too hasty when I said that Dykes was way below the standard that we require at Celtic? He would have been available cheap. He wouldn’t be now; you’d have to pay some ridiculous over-inflated fee now he’s in England.

Looking at now, and having watched this guy for Scotland, I’m still not convinced that he’s got what we’re looking for.

There’s been a few whispers about whether “one of the Glasgow clubs” – by this they mean us – should have taken a punt on him … that’s still all it would have been. The only thing in his favour is that physical edge he offers.

And we still don’t have that. I mean the Greek might provide it, but that’s still pretty much up in the air at the moment. When we see him we’ll know. But if he does give us that sort of presence then it’ll be the first time we’ve had that in a striker for ages.

Dykes would have given us that, but not much more. A no frills player, he does have some attributes which would have worked well at our club, as part of a two-man forward line. That’s critical. I’ve seen him play as a solo striker and he’s just not cut out for it.

Could he have done a job? In a Neil Lennon team maybe.

As part of a Steve Clarke team, definitely; I suspect we’d have signed him had Clarke been manager and if not him then someone very like him.

But it’s impossible to imagine him as the kind of player that a forward thinking Ange Postecoglou side would ever be able to utilise.

For all that, it would good to see him do so well the other night, and even better to watch him score that goal.