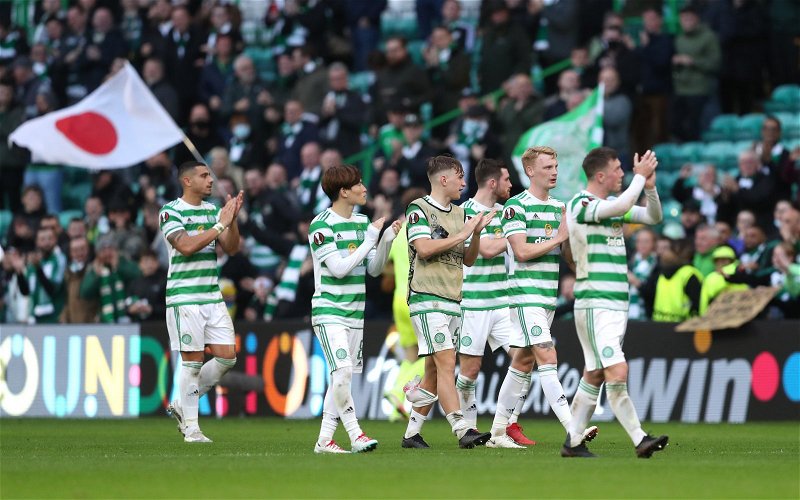 Yesterday I thought we were absolutely superb.

That was the game I’ve been waiting to see since we beat AZ at Parkhead earlier in the season, a game where we went toe to toe with a good side and gave them a proper beating. That was 2-0 going on ten.

The performance was excellent, with the players doing exactly what the manager has consistently asked them to do; they chased the ball at all times.

The second goal is a classic case of what happens with the high press when it’s done relentlessly by good players.

It is exactly what he must have been hoping for. His style is starting to get across.

Ange has got this; you can see it. We’re watching as this team beds in and people get familiar with their roles.

The defence –the much maligned defence – had its best game as a unit yesterday and I thought all of its constituent parts did their individual jobs brilliantly.

I took particular pleasure in the performances of Starfelt and Ralston, who have had to eat a tremendous amount of dirt from some of the most ignorant people ever to have internet access.

I thought Callum McGregor was the best man on the park, and I’m not going to let a little thing like a missed penalty dissuade me from that view.

I thought Kyogo showed again when he’s the cult hero of the support and the best attacking threat we have or have had in many a year.

But Jota almost stole the whole show, with a dazzling display and a great assist.

But the real praise needs to go to the boss, to Ange himself, and the way his ideas are starting to bear real fruit at last.

This is a brave manager, and in a game that has gone stale and where solid defensive systems look like morphing into the next fad, we have a manager here who values forward play and attacking football above everything else.

What a breath of fresh air that is for us all. And what a contrast from the last time Ferencvaros rolled into town and left with us in our first real crisis of that campaign, after a game in which we were awful and played Ryan Christie up front.

Those days are over.

This is a new team with a new man at the helm, but already it’s started to look as if it might be the best we’ve seen in a while.

The great thing about it, of course, is that this team hasn’t even hit its peak yet, and probably not even close to it.

What a scary prospect that is for our rivals, at home and abroard.