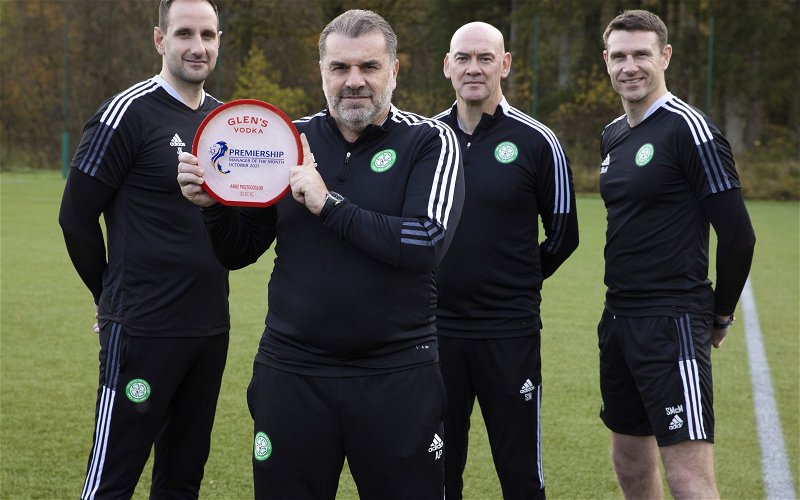 Yesterday there were two separate media events in two different parts of the country, and the contrast between the two men at the centre of them could not have been more stark. Eddie Howe was unveiled as the boss of Saudi play-thing Newcastle United on the same day that Ange won his first Manager of the Month award in Scotland.

Howe has never spoken about why he backed away from the Celtic job before now, but yesterday he said it was to do with his back room team. He didn’t elaborate on the issues there, but I hear some of them weren’t keen on the move to Scotland and he was unable to convince them.

And because he wasn’t able to have his mates, he turned us down.

It can work wonders. It can also end in disaster.

But real talent and real ability lies in being able to work with the tools which are to hand. I want to see Ange bring in some of his “own” people, but in his case that will mean folk he’s vetted and likes the look of. Ange does need his mates to follow him around. He’s got enough about him without that.

This is a real strength of Ange’s which is not given the examination it probably deserves. It takes a really resilient personality to do what he has done in his career; he has never moved from one job to another and dragged an entourage with him.

He doesn’t need to, and he doesn’t see the merit in it. He prefers to work with people already on the scene, people who know the club inside out and whatever we may think of John Kennedy and others there is no doubt that they have been at Celtic long enough to have the lay of the land down cold.

They deserve credit, too, by the way, for adapting to him and his ideas.

He made a point of appearing yesterday in the photographs with all the members of the coaching team.

He put them on the podium with him. That’s a mark of respect for them and for their work, and it’s also a unifying move, yet another one from this formidably talented man who has come here and in very short order made dramatic changes for the better.

Eddie Howe needed his pals. I can accept that and understand that and appreciate that. Rodgers brought his team with him and left with them as well. Gerrard is about to take the entire upper echelon of Ibrox’s coaching staff when he departs.

That’s the downside of letting someone bring all his buddies with him. They all want to leave at the same time.

Ange is a tough individual and very self-assured. When you consider that he moved not only to a new club but to the other side of the world without feeling the least bit concerned at what might be waiting for him at Celtic Park, it makes you glad it has turned out this way.

Eddie Howe would have done a good job at Celtic; I’ve never doubted it.

We’ll never know. And by the time Ange has delivered this title, nobody is going to even care.