Angry Sky Hack Wails As Celtic Fans And Irish Journalist Poke Him With A Stick.

Yesterday I was amused to see, on Twitter, that Sky “journalist” and ex-Ibrox employee Andrew Dickson was doing a bit of wailing and whining because a couple of people were slagging him over his pain at the departure of Steven Gerrard.

It’s when he attacked Phil Mac Giolla Bhain for no reason at all that I realised that he really is taking this badly. Should we have sympathy? I’ll be honest; it’s self-pitying whinging rather than anything else.

It all started with Phil referencing a tweet where Dickson had a go at Kris Commons for stating what was obvious to all of us; that Gerrard would head south at the first job offer. 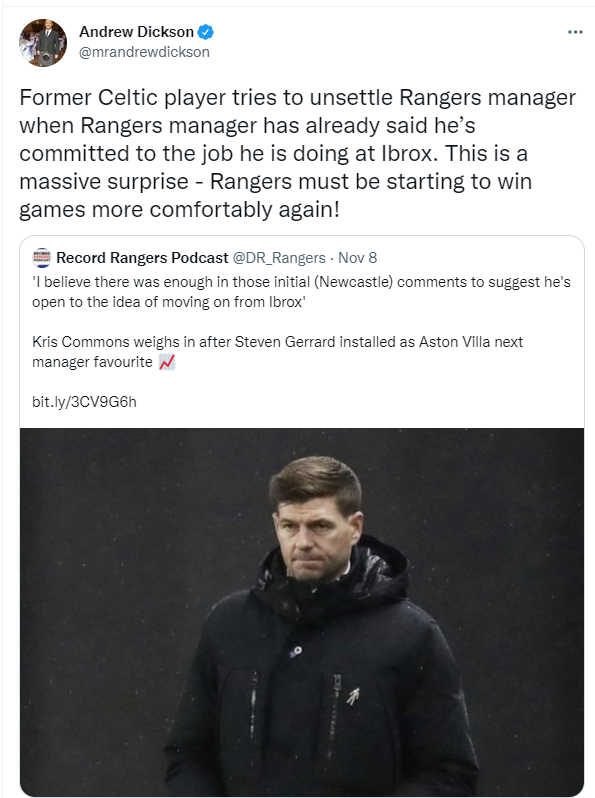 All Phil did was post a one word response. 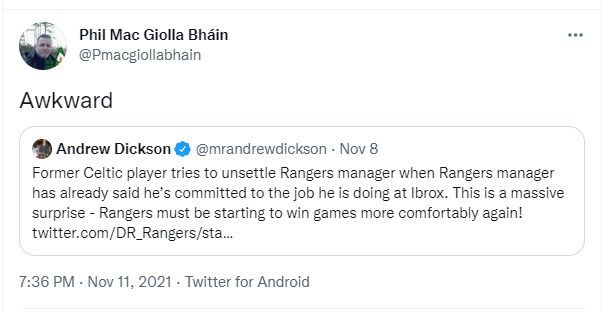 Dickson has worked at Ibrox, and has contacts there. He knew full well that there were issues behind the scenes.

Put it this way; if I knew that and he didn’t, isn’t he’s in the wrong job?

His response to Phil’s single word post was … well, bizarre. 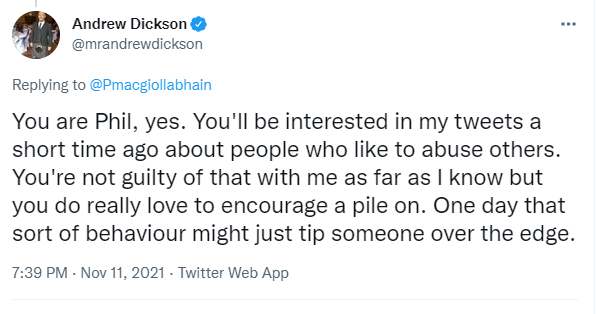 I don’t know about you, but his tweet reads a lot like someone who was urging a pile-on moaning about being piled on to someone who hadn’t even piled it on.

(That sentence makes a lot more sense that Dickson’s grousing does.)

I mean, wasn’t he piling onto Commons?

Isn’t his tweet here, in a sense, urging a pile-on against Phil?

Twitter has never been a place for gentle souls as everyone who has ever opened up a profile on it knows full well. All Phil did was draw attention to how completely off-centre Dickson’s observation was … and that’s what he came back with.

Prominent Scottish cultural commentator Bob Smith Walker – who isn’t a Celtic fan by the way, but an Aberdeen fan – was quick to point that out. 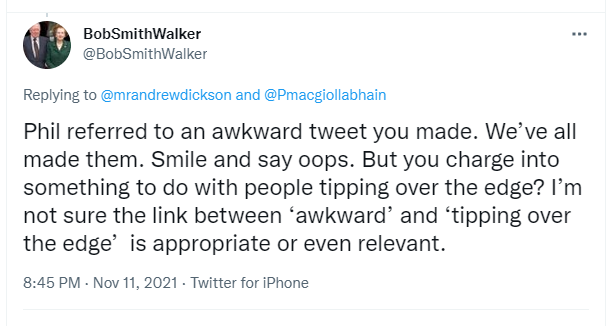 The thing is, Dickson’s comment was already getting “piled on” before Phil came along. So quite why he chose to single him out as some kind of instigator – when the stupidity of the comments was already obvious to everyone – I don’t know.

Also, Phil has about a gazillion Twitter followers … the only person who encouraged a pile-on here was Dickson … by responding to Phil in such a manner in the first place.

If people are judged by the company they keep – and those who defend them – then Dickson is on shaky ground.

My good friend Paddy Sinat from Vital Celtic was quick to dig one guy up for his rousing defence of Dickson and his demand that Twitter become a more civilised place.

As you can see, as Paddy was quick to point out, that didn’t go so well …

Amazingly, Dickson put up some token resistance and then came back, this morning, was yet another bit of self-pitying piffle, trying again to suggest we were all in some way nasty people for daring to point out that he had made a raging eejit of himself.

You know what? I’m piling on. I freely admit it.

When you consider the supremacist guff that he has tweeted out over the last 12 months, along with the fact that this all started with him having a pop at Commons – whose point, let’s not forget, was on the money – I don’t reckon he deserves any sympathy.

This isn’t some poor lost boy venturing into the big woods for the first time who needs to be protected from the mad and the bad, this is a former Ibrox media guy who now works in the mainstream press and should have the hide of a rhino by now.

I’m sorry that his idol has stunned him by walking away from the club.

I am sorry that he’s having a hard time acclimating himself to reality after so long living in denial of it, but his attempts to paint this as some kind of campaign of vitriol against him is pathetic and plainly false.

His allegation that Phil was encouraging a “pile on” is not supported by what the Irish journalist actually put up either, so he’s very damned lucky our friend is not litigious by temperament.

I find the Ibrox faithful hilarious on days like today.

These very same people were laughing their backsides off when Rodgers left for Leicester, and our anger at least was born, in part, from knowing that Rodgers is from a Celtic background … they believed the self-serving spin of a former professional footballer who’s first loyalty is to himself, a guy who didn’t come from their “culture” and who has very obviously been chomping at the bit to leave for at least the last six months.

But of course they are special.

They are The Peepul and this stuff doesn’t happen to The Peepul only all the other people.

Actually, let’s be honest, I’m not.

After all, Mr “Let’s Not Pile On”, Mr Let’s Clean Twitter Up is also the same guy who posted this disgraceful tweet …

And more recently, this …

Yeah Mr Dickson, you are incredibly hard to take seriously …