Celtic Needs No Advice From Keith Jackson On Reputation Management. 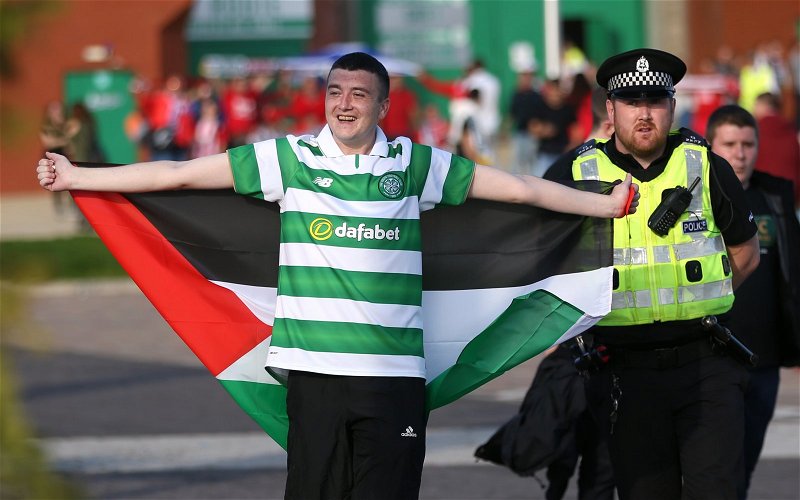 It really ought to go without saying.

It does go without saying that stupid people should avoid professions like journalism, but Scotland has set such painfully low standards in that profession that it is full of them. A case in point is Keith Jackson, who I’m told lacks even the most basic formal education.

And boy, oh boy, does it show in the “quality” of his work.

Today he’s taken a shot at an expected target, an easy target, in the Green Brigade.

But of course. It will be the sport of choice for the next fortnight.

But as per usual, Jackson has only sought to remind us how out of his depth he is when he takes on a subject bigger than the sport he covers and of which he is anything but an expert.

Which he thinks is tarnished year on year by the response of the fans to this Poppycock.

Jackson appears to forget – if it ever dawns on him at all – that he lives in a tiny wee part of the world and that Celtic is a much bigger club than that.

He appears not to have grasped a couple of things which every one of our supporters already knows.

First, if we tailored our club to suit the whims of the Scottish media and the majority of people in this country we’d be as well closing our doors.

We live amidst a constant sea of hostility, flowing all around us, and if it wasn’t this it would be something else they’d be moaning about.

Our “reputation” seems to have survived okay, in spite of it all.

Jackson seems to think that the behaviour of a few fans at Dundee yesterday casts a dark shadow over everything that’s good in the game.

What actually casts a dark shadow over everything good in the game here is the possibility that clubs could go to the wall because we have not put in place the proper protections to prevent that.

He has written exactly nothing on that subject, and he’s had ten years to do it.

In that, he’s not alone. Nobody in the media has.

But Jackson wants to lecture us today on Celtic’s reputation, and how we’re the ones bringing the sport down.

Pish. Decades of sectarianism at Ibrox apparently didn’t do that.

Where was he all that time? Where was he during the recent argument over the club’s use of the Famine Song tune in an advert?

Or their orange strips? Or any of the other assorted outrages?

No club has ever been in greater need of reputation management, as a constant, evolving thing than the one over there … but of course that’s what the media is for, airbrushing the narrative day in day out, week in week out, year in year out. Celtic don’t have that luxury.

Celtic’s reputation needs no cleaning and no management at all.

I’ve done to death how I felt about breaking that silence yesterday, but outside of this island nobody cares.

They see this country and its bizarre fixation with the “glory” of war as something unhealthy.

Many of those countries have a slightly different experience with the British Army than he’s aware of. In those countries, our reputation has been enhanced over the years by some of the things he and others find reprehensible.

It’s why we can truly call ourselves a global football club.

Jackson thinks the club was bullied into dropping the poppy from the jersey due to a small band of supporters. What nonsense. If he thinks our board does anything in response to the wishes of fans he hasn’t been paying attention.

Our club took one of its very few principled stands on this issue when they considered the implications of a football team forcing its players to wear a symbol that many of them found disagreeable or offensive.

It was absolutely the right thing to do.

We are a Scottish-Irish club.

Jackson may have no respect for that but the club has to, even if its directors are complete charlatans in other areas.

The Irish heritage of this club is pissed all over having that thing on the jersey and it is an especial insult to make Irish players pull it on. It’s equally insulting to have players from the continent wearing it, which is to say nothing for any of those nations where the Empire ruled for eons and made slaves out its citizens.

Jackson refuses to acknowledge that there is complexity to this issue.

Not that he could understand it if he did acknowledge it.

The truth is that the people who hate us here at home need no excuse to do so and everything about us that makes them hate us wins us two friends elsewhere on this planet. And it all factors in. It all comes to bear.

We have survived our entire history with much of this small-minded bigoted island sneering at us. We will survive the temporary anger of the media on this, much of which is confected, much of which is plainly hypocritical and the rest of which is just pig ignorant.

In truth, this is actually a much simple debate … still it’s several degrees over his head.

There was a time not that long ago when clubs were not forced either by convention or by this kind of sneering contempt to observe this nonsense unless it fell on the actual day of remembrance, which is 11 November.

It was to commemorate the fallen of one specific war.

The poppy was not shellacked onto every football strip in the country like a piece of cheap souvenir tat.

The Great War ended in 1918 … the country somehow survived for 90 years without this garbage being rammed down the throats of those of its citizens who want no part of it. It has become a political symbol and here in Scotland it is looked forward to for one reason only; as an annual stick to beat Celtic, and most of our enemies don’t even pretend otherwise.

He must have written his article this morning with a certain amount of relish. The gleeful reaction to yesterday on Ibrox fan forums shows you that all this is to them is a dung heap on which to climb and crow. Another one.

The Green Brigade’s disrespect for the silence is nothing on the way these people view it … as another badge of supremacy, worn on the lapel, the colour of the blood they are up to their knees in.

And we’re the ones who need reputation management? Don’t make me laugh.