As Celtic Pushed On, Another Unlikely Hero Emerged To Become A Key Player. 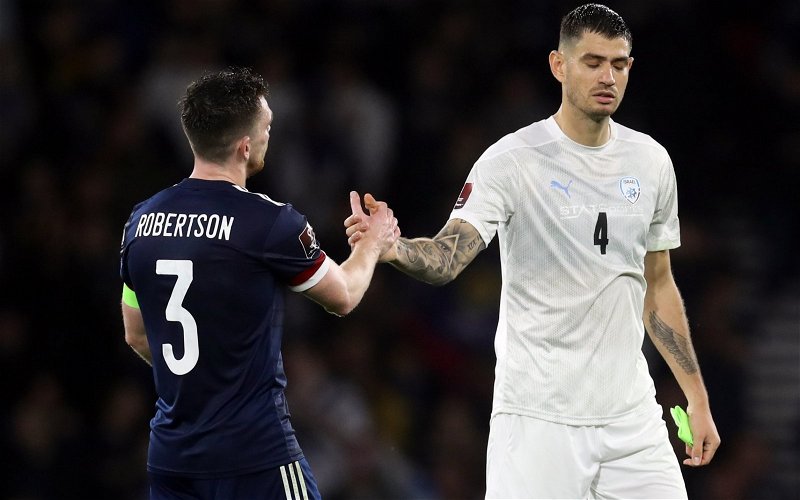 As Celtic has marched onward for the last few months, sustaining a title challenge, winning a series of tough games, achieving respectable results in Europe and winning a domestic trophy we all know that there have been heroes and some of them quite unlikely.

I think everyone thinks of Anthony Ralston when we talk about improbable heroes and they are quite right to. But there’s another player who has stepped up in a big, big way and it is less surprising to some of us but perhaps even more surprising to others.

The unsung hero who, at last, is getting recognition is Nir Bitton.

I am really pleased for him. I’m a bit Bitton fan, but only – and this is the crucial thing – only when he’s played in his natural position, which is midfield. He was signed as a midfielder, he played the better part of his career as a midfielder and his worst games at this club have come when he has been moved outside of that position to play at central defence.

It was madness. Too many Celtic coaches have persevered with this nonsense, but Ange prefers to have players where they belong and especially at the back. At a pinch Nir Bitton can deputise if there are no other options, but he has shown us where he belongs and the manager has responded by making him a big part of the plan in that role.

I think he has two great strengths as a player. One is his determination and his never-say-die attitude. He never hides, even when things aren’t going well.

He fights to the last whistle. And secondly, and more importantly, I think he can pass a ball as well as, if not better than, any other player in the side. He has a great ability to spot a run and put a pin-point ball up the pitch. He is a great counter-attacking footballer.

I think he’s having his best spell as a Celtic player right now, and this is a guy who has taken a lot of shit from some sections of our support. I was delighted to see in addition to a starring role in the team yesterday he also had the armband; he earned that.

The big guy is 30 now. He’s been at Celtic since 2013. His contract runs to 2023. He will be entitled to a testimonial at that point if he stays long enough, and of course he will. By then I expect he’ll have made close on to 300 appearances for us – an outstanding return on our initial investment. He cost us a mere £700,000, a fee he’s repaid ten times over.

It is great to see him thriving in the team under Ange. His best spell prior to this was under another high-tempo manager who saw the quality in his game; Ronny Deila. Ange has had an extended opportunity to watch him lately, and he must be impressed.

Bitton will be at Celtic for a few years yet; in fact, we may be seeing the best of him now.