It’s Time Some Celtic Fans Stopped Provoking The Ire of UEFA … And Others. 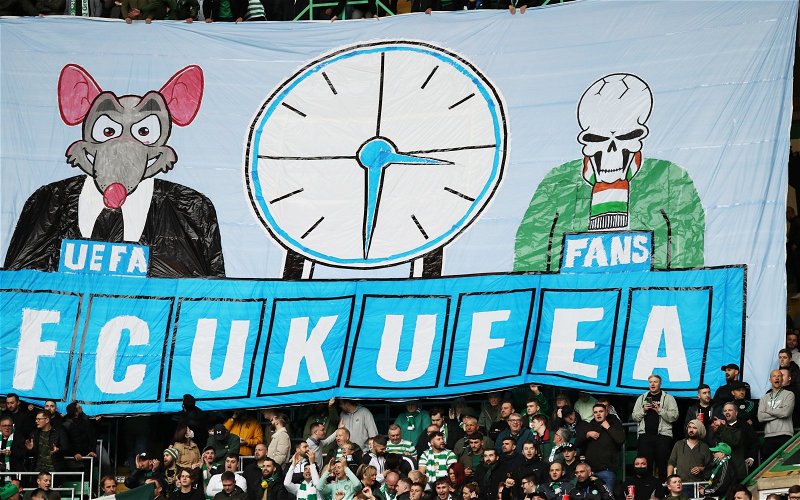 This is a time for basking in the triumph of the cup final, and not for going over old ground, but it would be remiss of me not to do at least something on the fines we got from UEFA this week.

They are the latest in a long line of them.

Most are UEFA trying to save face as they attempt to balance their “no politics” demands with the reality of football in the modern world. I am not concerned about banners or singing.

Left wing political expression isn’t going to get us hammered.

Say what you like about UEFA: they recognise our fans politics for what it is.

They know the difference between us and the dregs of the right.

There is no comparison and UEFA has no interest in making any.

That’s why our songs have never resulted in sanctions no matter how many of the hacks report us and hope for the best on that score.

I am concerned, and have always been concerned, with the “no pyro no party” idiots who I wish to God would behave like grown-ups instead of entitled children. Yeah the cup final display drew “oohs” and “aahs” from the watching world, and it is certainly a spectacle … still, it’s reckless, dangerous and illegal. Doing it in Europe would risk more than fines.

And of course, I’m equally concerned because these latest fines weren’t for pyrotechnics or for banners. They were for objects thrown onto the pitch, an act so bloody moronic that it forces you to draw a deep breath and ponder the mentality of it.

Amidst the friendly outward facing support as a whole, we have a small number of reprobates with no respect for their fellow fans or for the rules which bind the rest of us.

During the recent silent protest, I know for a fact that a number of Celtic fans who decided to sing because these other fan groups wouldn’t were threatened by pissed up neds in the north stand.

Threatened. Inside Parkhead. By fellow Celtic supporters. For backing the team.

Our club has no need and no place for yahoos like that, the sort of yahoos who would throw objects onto the park. UEFA will not hesitate to close stands if that continues.

What’s worse is that some people would undoubtedly use it to open up a wider debate which we don’t want. Recent behaviour in domestic games – like the bottle thrown at Barrie Mackay – makes some members of our political class itchy for strict liability.

God help our club if that is introduced. Can you imagine a full-on standoff between some of our fans and the Scottish Government, inside the grounds, with points deductions and everything else on the table?

It doesn’t even bear thinking about.

We need to keep that idea as far away from the national conversation as possible, and that means that the small handful of goons have to get a grip or be gotten a grip of.

So yeah, even amidst our mood of celebration I have a minor gripe, with some members of our fan base.

You are not helping us.

You are not supporting us.

You are indulging yourself at Celtic’s expense, and it’s time to give the rest of us a break.