Ange Was Entirely Correct To Turn Down Ola Solbakken For Celtic This Summer. 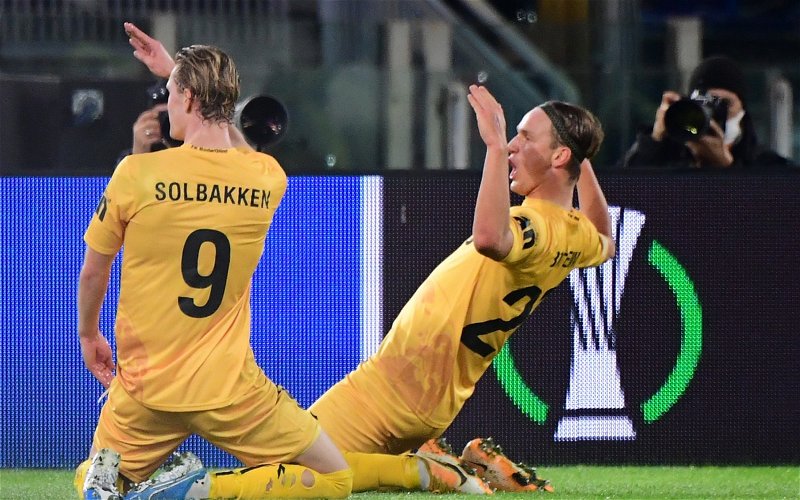 The news today that we were offered Ola Solbakken in the summer came as no surprise whatsoever.

We would have been offered a thousand players this summer, as part of the team-building process we had announced was underway.

Turning down some of those players will be vindicated by history. Others will not be.

That’s the way the business works.

Ola Solbakken may or may not turn out to be worth something, but in the context of our summer and the refusal to move for him, we have been vindicated already.

There was nothing that he did as a player prior to this campaign to suggest he was ready.

The players we’ve bought instead have contributed. We’re not missing out here.

His record in Norway is not exactly setting the heather on fire stuff, and although he’s young you still have to judge him on what he’s accomplished so far.

If he’s the sort of player who will fit the Ange Postecoglou model then we’ll certainly consider him in the summer, but we do not sign players on the basis that they played well against us twice.

If we did this sort of thing we’d have bought Liam Boyce years ago, and fans would have been hollering at us to get him the Hell out of the club for somebody better from the minute the ink was drying on the paper.

Some folk get odd ideas after nights like last night, that’s all.

He looked decent. Over 120 minutes.

Against a Celtic side which we all agree wasn’t at its best.

He didn’t look like a potential superstar or world beater, and six goals in twenty-six games in the Norwegian league doesn’t exactly set off alerts in Manchester, Madrid and Milan.

The manager will have noted how well he did, and the scouting department might have been sent out to watch him more closely, but I doubt we’re preparing a bid just yet.

We did the right thing in the summer.

We focussed on players who fitted a certain skill-set, and don’t forget, these are players we pursued.

Solbakken was offered to us, we didn’t spot him, think he was great and then put in a bid.

So we had no frame of reference except for recommendations from his people … we did the right thing turning him down.

Sometimes these players come back to haunt you, but only if you allow yourself to feel haunted.

Harald himself came back to Celtic Park and scored a winner and don’t even get me started on Jo Inge Berget.

I hardly think about these things anymore, as I have put “what might have been” thoughts out of my head about the likes of Olivier Giroud, who was on the brink of signing when Montpellier came in for him.

This is a moment when everyone at the club has to focus on the bigger picture, on the strategy we’re following … and it’s the first time in ages we’ve even had one of those.

Short-termist thinking will only get us in trouble.

I wish the boy well. He is clearly going to have a good career.

But is he at the level we need to take the next step, and will he ever reach that level?

I’ll let the professionals work that one out, they are the people paid to take these decisions.

I write this as the guy who’s spent three years before this season recommending Martin Boyle.

Watching Abada, I’m glad I don’t get to make these kind of calls.