Did The Media Lie Yesterday About Celtic’s Reaction To The Ibrox Game? 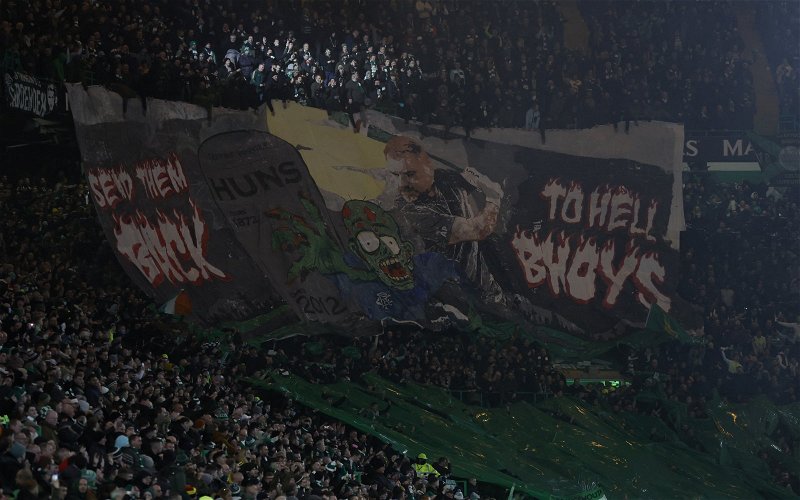 Yesterday, the press was late to catch up with the news that most of the blogs were well aware of in advance; that the club had decided to take action and close a part of the standing section for the coming Scottish Cup tie against Raith Rovers.

It’s a typical stand-off in part between those who think the club can do no right and those of a more pragmatic bent.

On this one, I’m with Celtic as I’ve made plain.

But once the media caught up, The Daily Record added an additional caveat; that the club was taking the action in part because of an “offensive banner”. And I was a bit puzzled by that assertion, and somewhat concerned because the club would have lost my own support at that point if they were using the safety issue to make a point of policy on that.

The banner in question – the Send Them Back To Hell Bhoys – was criticised for the use of the word “hun” in it.

I’m bored stiff with this debate, because it’s ridiculous.

The suggestion that the word is sectarian is manifestly false, the invention of snowflake Ibrox fans who want to paint the Celtic support as being full of people as twisted as theirs is.

The word does not denote Protestants. That banner was not a reference to “Rangers fans” as some have ludicrously suggested.

The Send Them Back To Hell reference is a clear zombie reference; a statement on the dead club and the NewCo’s hilariously naff efforts to pretend that they are turning 150 this year. I would be appalled if our club was calling our supporters out on the basis of that banner, and I would have had a few things to say about any statement to that effect.

The Permanently Offended Of Ibrox are the last people who should be trying to climb onto a soapbox with their disgusting history of racism and bigotry, and our club should not be providing one for them by criticising our own fans.

Like I say, I was pretty angry at the suggestion that they had … but I looked for the statement to that effect, even if it was a couple of lines in a mainstream piece from a club “spokesperson”.

And you know what I found? Not one word which confirms this.

As far as I’m aware our club has done no such thing. If I’m wrong, someone point out to me where the statement is.

Otherwise I have to conclude that the Record simply made that up.

In the absence of further information, I have no option but to say so.

Like I said, I would have been surprised – very surprised – if the club had issued any kind of public rebuke to the fans over banners from that night and I don’t see any evidence that they did so.

I think we could all take a stab at guessing why The Record might have wanted to suggest that they had.

It doesn’t take a genius to work that one out.