The mentality of Ibrox’s fan media has never been more clearly expressed than it has been tonight, with a truly repellent tweet from one of their “official club media partners” this evening.

What that means is that these are the Peepul who the club allows to attend its press conferences.

They might have charged them a remarkable sum of money for the “privilege” but these people carry the official seal of the club’s approval, and tonight they have trawled the gutter. 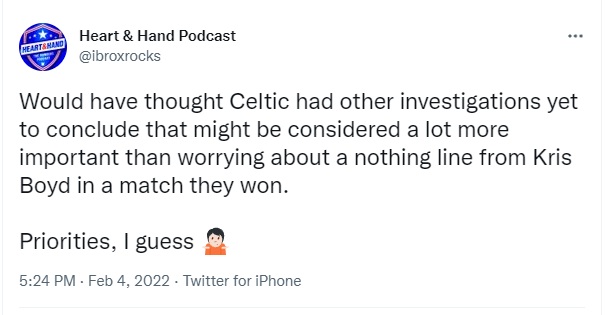 For starters, speaking up in favour of Kris Boyd after what he’s done today is as good a case of putting yourself on the wrong side of a debate as you’ll see outside of those Tory MP’s who think standing in the line of fire to protect Johnson is the smart political move.

There are some things that are just so wrong that defending them in any way taints you with their stink and that is exactly what they have done tonight.

There can be little doubt that Ibrox’s hierarchy approves of this kind of behaviour; if they didn’t they would pull the credentials for the people on that site, as they should have when the scandalous statements from some of their founders were published in a national newspaper last year.

They would be considered a toxic embarrassment at any other club and barely allowed in the support far less credentialed for the press room, and that tweet dredges the basement in a manner that it is impossible to imagine any site on Celtic’s network ever doing.

Celtic’s statement was aimed at a pundit who suggested that their players target our captain for a serious injury; that’s a sentiment which should be condemned from every part of the blogosphere, right across football and professional sport.

The casual dismissal of that statement is damning enough.

The allusion to other issues, with which their support has a dangerous and unhealthy obsession, is quite another, and although Celtic won’t comment on this publicly they should be having a word, in private, with those in the Ibrox boardroom to express their disgust.

Ibrox’s “official media partner” has demonstrated quite clearly tonight in which particular gutter it dwells.

If they had shame at all they would delete that and move on.

But then, if they had any shame at all they would never have posted it in the first place.

Frankly they are a disgrace to the club they represent and if it’s content to continue being toxified by these sort of views then that club will never shake off the stench that surrounds it, that of bigotry, sectarianism and hatred.

It really is an appalling state of affairs, but one they seem content to accept.