Kris Boyd’s Crass Johnsonian Non Apology Treats Celtic, And Our Fans, As If We Were Mugs. 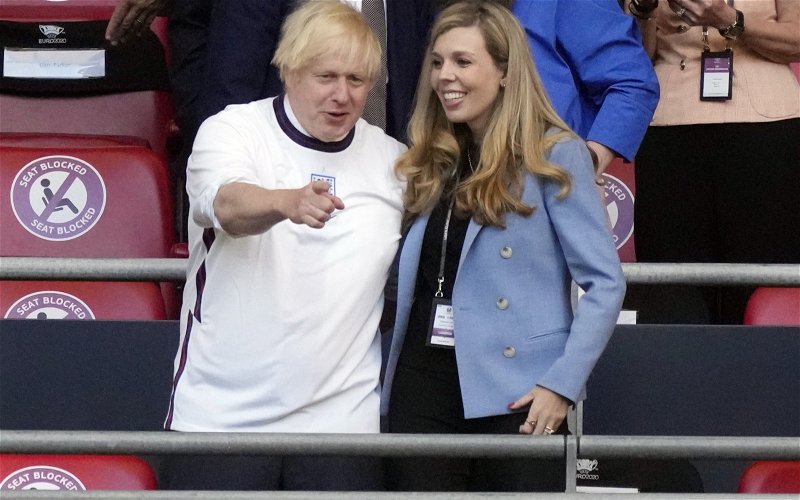 The last month in politics has been characterised by our Prime Minister taking the public for absolute fools.

First it was that there were no parties.

Then he didn’t know it was a party, he thought it was a work event.

One idiotic MP lickspittle said that at one event he was “ambushed with a cake.”

And over and over again we were told to wait for an inquiry to tell him whether he’d had a party in his own house and garden and now we’re reduced to waiting for the cops to do it.

At every stage there has been a smirking performance which doesn’t disguise that he thinks every single one of us is an absolute mug.

And along the way, there have been some non-apologies too, so cynical that you marvel at them.

Dominic Cummings is not surprised.

He’s seen this guy up close and for long enough to draw the only conclusion that anybody who knows anything about this stuff can reach; that Johnson’s inability to follow societal norms, to tell the truth or to accept the consequences for the things he does is the mark of a sociopath. I’m amazed it took him this long to get there.

So in light of that, what are we to make of Kris Boyd tonight, and his own sneering non-apology?

What else but that he too thinks the rest of us are mugs, that he views us with contempt but also that he’s been slapped and knows he has to backtrack a bit?

In short, it’s Johnsonian in its contempt, but also in its cowardice.

“My Old Firm column in today’s Scottish Sun appears to have irked some Celtic supporters. Therefore I think it’s right that I add some context and clarification to a reference I made about Callum McGregor. I wrote: “The fact he managed to get through the 90 minutes without anyone testing out that face mask is another story, but his commitment to the team was tremendous.” Some have taken that line to mean I wanted one of the Rangers players to intentionally try and hurt the midfielder. However, that is absolutely and unequivocally NOT the case. It was simply meant as a criticism of the Rangers players for their failure to get close to McGregor.”

First, it wasn’t just “some Celtic supporters” he “irked.”

His comments were disgusting and infuriated a fan-base which has developed a high tolerance threshold for his cretinous delinquent behaviour. And it did more; it appalled Celtic as a club.

And I suspect that’s the only reason he has “clarified” it tonight … in a manner which itself is utterly abysmal.

Where was the apology to Callum McGregor? There wasn’t one.

He isn’t really apologising to anybody; it’s Johnson again, with all his “I didn’t intend to cause offence” schtick, the kind of excuse that didn’t wash when he lied in a column and was sacked, when he lied to Michael Howard and was fired or any of the numerous occasions when he’s lied to former wives or girlfriends about his private behaviour.

But he thinks the rest of us are daft enough to believe him.

That’s who Boyd is like tonight, the desperate excuse for a human being clinging to power by his fingernails.

His explanation for his words are preposterous, right up there with Johnson’s recent insults.

This is his “I didn’t know it was a party” moment.

What he wrote is perfectly plain and his latest “update” wasn’t an attempt to clarify but an attempt to obfuscate. Boyd is thick. But he isn’t so thick that the connotations of what he wrote aren’t crystal clear. There are times when what he writes is virtually unintelligble rubbish, but this was not one of those times.

His effort to handwaive this away makes him look even more like an amoral bastard without a shred of shame.

If this is his “apology” he can shove it up his gearbox.

And Celtic should not accept it, and the rag he writes for should not think that this puny man and his pitiful “clarification” has shut down this affair. He is a disgrace and disgrace will continue to follow around anyone who backs him over this.