More Decisions Being Questioned Except The One That Went Against Celtic. 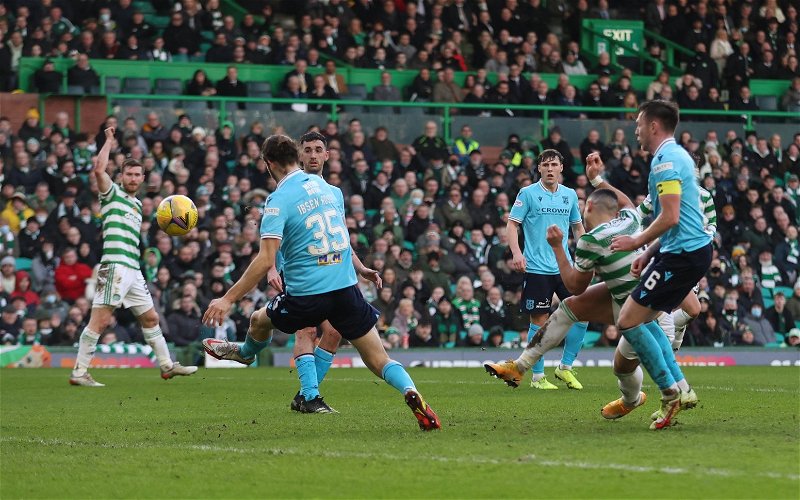 Another weekend passes and another set of “controversies” are being highlighted in the media, some going against Ibrox and some in favour of Celtic.

This is not amazing or surprising.

It has been happening for many months.

What continues to impress me is the cognitive dissonance on display; the press only highlights what it wants to.

At 2-1 yesterday, we had a stonewall penalty turned down.

It was so obvious that even Ange, who never harangues referees, was shouting at the fourth official. In the aftermath of the game the narrative is built around the one Dundee allegedly should have had.

But if we get the stonewall one in the first half the game is over before the break.

At Tannadice there was an incident seven minutes into injury time which is pretty horrendous; Jack’s wild lunge with the studs up which the referee (Madden) didn’t even think merited a yellow card, although that was a potential leg-breaker and is going to be scrutinised by the SFA Compliance Panel. It is amazing what these people choose to want to see.

The talk again today is of VAR … you’d think our club was totally opposed to its implementation, but we’d have it in a minute.

Had there been VAR Dundee wouldn’t have got a point yesterday, we’d have been 3-1 up at half time and the whole debate would be moot.

If these people are suddenly concerned about refs, guess what?

We have been for years.

Football governance is a joke, and the last thing the game here needs is another season of this. The technology exists to solve some of these problems … it is ridiculous if we do not embrace it and introduce it as soon as possible.

But I suspect that pro-Celtic decisions will still get more press coverage than anything else.

The hysterical reactions to those which have gone our way this season convince me of it.

They see only what they want to see.