Why Ibrox Must Be Sick About Celtic’s Potential Kieran Tierney Windfall. 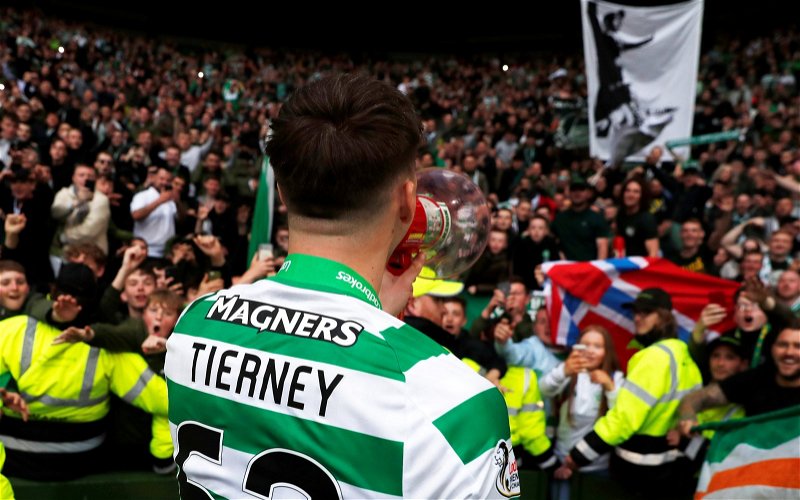 And oh how the money rolled in …

I’ll do a piece later, obviously, on Celtic’s financial returns, which were published yesterday and which are pretty astounding. The news for the clubs who see themselves as our rivals just keeps on getting worse

. Another example of that came today.

Beale Flies In With His "List Of Demands" But It’s All As Fake As “The Shortlist” Was.

Kieran Tierney is linked to Real Madrid in a move the media suggests is worth £50 million. Let me tell you something; if Tierney goes to Spain from England that’s a conservative figure.

It’s the only part of the story that sounded unlikely to me.

Tierney is the real thing. He is a true athlete, a player who takes the job as seriously as a nuclear safety technician.

I knew that he wasn’t going to stay at Celtic long-term when I first heard him talking about how he views football as his job, and that he wants to be as good at it as he can be. He has proved that he can play at any level.

If he leaves for Spain the fee will be enormous, and we have negotiated ourselves one very sweet cut of it.

Even at that conservative £50 million, the take for Celtic would be £7.5 million. That’s a major bonus for having developed this guy and it’s a real triumph for the Academy that he’s getting such interest from a global super-club.

But it’s the financial implications which will rock Scottish football; Celtic, standing on the verge of another huge injection of cash which didn’t come from directors loans or any of that equity confetti nonsense which is the operating method of the club across town.

This is a reward for something we grew and nurtured, on top of the vast fee we already got for him.

At Ibrox they are congratulating themselves on a single deal for a youth player; the bonus we’re on the brink of for Tierney might end up bigger than what they got for Patterson and as he’s not yet an Everton first team regular a lot of the bonus payments might never find their way to the Ibrox club, far less any kind of return on a sell-on fee.

In the here and now it’s the sheer weight of it which will send shockwaves through their club.

Celtic is a money machine.

Yesterday’s figures were astounding considering that we were able to post them amidst a mammoth rebuilding job.

We can keep on growing, whilst they are forced to examine tough choices.

I will explore the theme later on today, but for now just marvel at how strong we are at the moment as this club finally wakes up and starts revving all the engines at once.