Ange, Celtic, Sunderland And The Genius Of Martin Bain. 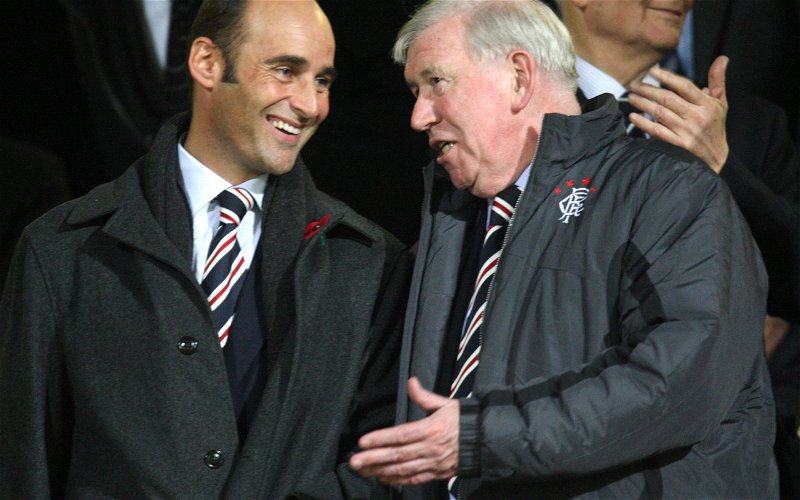 It was the late, great, Warren Zevon who said it best; “I was in the house when the house burned down.”

And whenever I watch Sunderland Til I Die (and I’ve done so several times and so should every football fan out there) I hear those lines when I look at the smooth, smug, self-satisfied face of Martin Bain, the proof that lightning does strike twice.

There can’t be many CEO’s who have been on the front-lines of two football clubs as they melted down. Sunderland wasn’t liquidated, but two relegations on the bounce isn’t exactly a sign that things are in smooth working order.

Bain tries to escape the blame for what happened at Ibrox by pointing out that he opposed the sale to Craig Whyte.

But he opposed it because he knew that Whyte didn’t have the funds to carry the debts as Murray and the bank had once done. A really good CEO would have steered the club out of a position where it was relying on sugar-daddy dough in the first place.

There are two moments involving Bain in Sunderland Til I Die which make me laugh.

The first is in the second season, when the two new owners are trying to sort through the detritus of the previous reign. They come across the club’s cryo-chamber and wonder if any player has ever used it. When they are told no, but Martin Bain used to enjoy it there’s a look that passes between them which is part disbelief and part disgust.

The second moment is funny in hindsight; it’s the moment in season one after Bain has fired the failing manager Simon Grayson and is looking for a new boss. He is vague about the other candidates but points out that some are a little left field.

Then he tells the cameras that he does, in fact, have a specific person in mind for the job.

There can little doubt that the specific person he had in mind was Chris Coleman, who he offered it to and who accepted it. But there was another name in the frame, a guy who almost got it … and this is where the real genius of Martin Bain reveals itself.

Because as Michael Bridges, the ex-Sunderland striker, confirmed in a podcast again this week, the guy who almost got it was none other than big Ange himself, confirming what the manager said at one of his earlier press conferences when he talked about the opportunities which never quite panned out, the discussions he had which never did lead to a job.

One of them, he had said, was at Sunderland and when he said it I wondered, briefly, if it might have been around that time or shortly before it when they were sacking managers at breakneck speed to stave off the first relegation.

I have to say, knowing that he was one of the men on Martin Bain’s mind as he sat there in the office that day in front of the documentary team is very amusing.

Because can you imagine the difference at Sunderland had Ange gone there?

That club full of posers and charlatans and non-triers would have been turned on its head. His passion and intelligence would have changed the whole dynamic of the place, and he would have been a hero to the working class people of that city before long.

Instead Ange went to Japan, where he enhanced his reputation with a title at an unfancied club. We know where the road went from there, and we’ve seen the incredible job he’s done of turning around our club from what was effectively a standing start.

Bridges comments are illuminating, and they deserve to be read in full.

“I wanted Ange to get the Sunderland job before Chris Coleman did,” he said. “I was speaking to Martin Bain about it and I said ‘get this guy in, he’ll change the culture of your club and he’s a serial winner’. And his comments were that he’s never heard of this guy … He’s won the Asian Cup and that just shows you how much of a bubble people live in. But I’m delighted Ange has gone and broken the trend now. He’s gone to Celtic and is at a massive club. The media gave him crap from day one and Ange handled it like you wouldn’t believe it. He said he will do his talking on the field and he’s done that. He is breaking the trend.”

It fantastic to read that, and to know that a lot of people – and not just Ange himself – are smiling at how well this has turned out.

I try to remember that I was heavily critical of this appointment myself for all sorts of reasons, and that one of the first people to talk me down from my anger was Jarod Hill of the Celts Down Under podcast who had nothing but great things to say about Ange and knew instinctively that he would be a huge success.

In the meantime, it’s worth remembering – and paying tribute to – Martin Bain, who gave us many laughs whilst at Ibrox but was saving the best for last, as the CEO of Sunderland, who had Ange in their sights and who let him go for want of a “bigger name” … who promptly got them relegated again and Bain the sack for a second time at a club he ran into the toilet.