Scott Brown – And Celtic – Would Benefit From His Learning Under Rodgers. 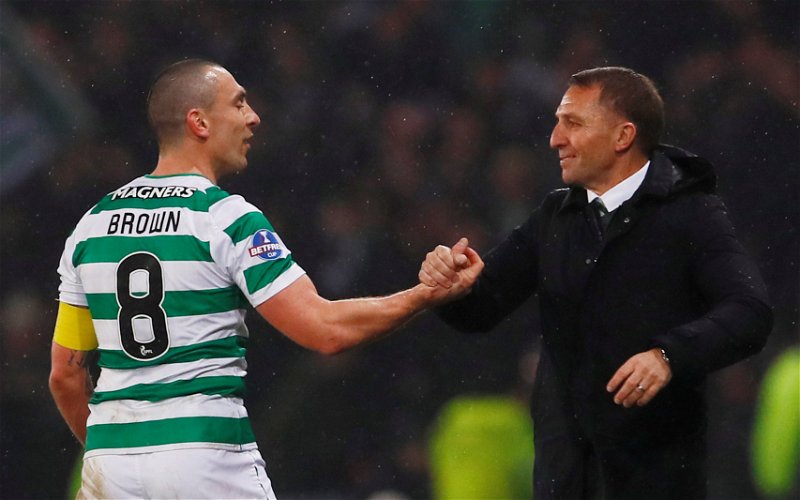 One website today thinks that the news that Rodgers has made Scott Brown an offer is a “blow to Celtic” but it isn’t. The best thing that Scott Brown can do is go to Leicester and learn the game from a top class coach in a top class league.

It is, crucially, the best thing for Celtic too if Brown is to come back here one day either as a coach or as a manager. What a place to earn his stripes. What a manager to get an education under.

For all we might hate the manner of Rodgers’ departure, it would take not revisionism but a wilful break with reality to deny that he is a superlative football man.

Scott would learn plenty from working with Ange, but there would always be more pressure on him here and no real chance to grow.

Time away, time south of the border, time working amongst the excellent Leicester set-up would give him the tools to succeed anywhere. By the time he came to Celtic he would be ready and not a rookie still learning on the job.

I would be delighted if he went to England under Rodgers.

It would let Ange get on with the job under the current team without anything rocking the boat. It would allow Scott to continue to forging ahead with his career and in the EPL of all places.

That is more good to Celtic, in the long term, than the short term fix of seeing Brown paraded on the telly as an addition to the coaching team. I don’t know where some people get the idea that we would be sad to see it pan out this way, but they clearly aren’t capable of thinking strategically about it, because I can see no downside to this at all.

Rodgers rates him. They got on brilliantly.

He will entrust Brown with things Ange might not be willing to, without that relationship.

Which means Brown will learn more quickly and over time will be ready for the biggest step up of all … into his first management job. That can’t be at Parkhead but it can be a few years down the line after he’s proven himself.

The chance to go to England and work under Rodgers is one that he should jump at.

It is a magnificent opportunity for him, and over time for Celtic too.