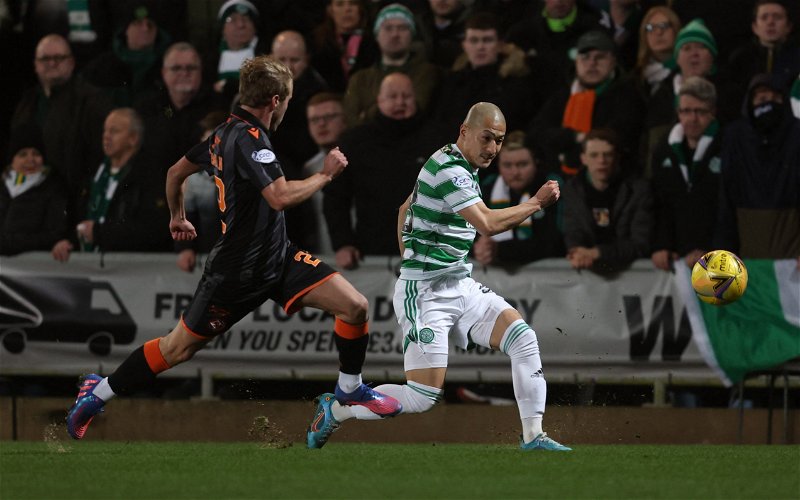 Sitting in my seat at Celtic Park today I was conscious of several things, the first of which is that I might only be back here another twice this season. Although we have three homes games to come after the split, I’m guaranteed to miss at least one of them due to taking a well needed (although some would say not well earned haha) holiday.

So I’ll miss the last two games. It is nearly certain that one will be at home and one away. I don’t expect that the league will be won while I’m away, so in point of fact there is a 50-50 chance that the league decider will be a Celtic home match. I suspect I’ll need to be very lucky to see the title won in the flesh. It will probably be the last game of the month, and as the Ibrox club is virtually certain to come to Parkhead first it’ll be an away game.

So although there have been big, big games here this season the one that sees us clinch the title will probably not be played at home. No matter. If it’s not then there’s obviously a good chance of a title party at home in the following game.

This has been a momentous campaign so far. But through it all one thing has been virtually constant; our dominance on our home turf. If Celtic’s journey through this season was a thousand metaphorical miles it is all the more amazing that it has actually come down to this; home game 16 of 19 for us to glimpse the end in sight, and a triumphant end at that.

At the start of this campaign it would have been easy to question the wisdom of purchasing a season book. Everything that could go wrong seemed to in the opening weeks. Everything except the home games where we were devastating from the word go, both domestically and in the early Europa League qualifiers. It was a match at home where I knew the season was going to be very different from the gibbering nonsense being written by the hacks.

On the night we beat AZ here we played some oif the best football, against a team that I thought would be too strong for us, that I have seen a Celtic side play in years. I thought then that if we got the last few pieces of hte jigsaw that Ange had already shown us the hallmarks of the kind of ootball he wanted us to play, and so it has proved to be.

If the pre-split games were merely setting up the party it is fitting that we should have closed off the home form in such devastating style. In a season where the home displays have given me some of my finest memories in the team in years, that was the best of them, easily, comfortably and by miles. Six scorers, seven goals, a blistering display which – I can assure you – has left the fans across the city shell-shocked and fearing the week to come.

So whoever we play in the three games before I leave, and whether two are home games or one decides the title, the season ticket was money more than well spent because we’ve saved our very best displays for the crowd at Celtic Park, although that’s not to say that the away games haven’t been good or we don’t deserve credit for them.

But although I’ve had 14 home league games – I’ve missed two on account of illness – and obviously the European ties, I do feel that I will miss my seat at Parkhead in the close season and I feel a certain amount of sadness at knowing I have only two left to attend. But God it has been worth it. Our title will not only be about home victories but it’s the 19 league matches at Paradise which will laid the foundations for my confidence … and for the success of this campaign.